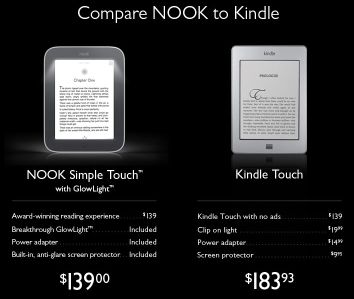 Comparing Nook to Kindle? Stop. Barnes and Noble Has Given Up on Influency

Less than ten months ago, Microsoft paid $800 million for one-sixth of one part of Barnes and Noble. I told you then that it was a ridiculous valuation, but numbers notwithstanding thought that Microsoft was making a good move buying their way into a new market.

Now, even the “hot market” part of the deal is looking bad.

Barnes & Noble’s stock price and overall valuation hasn’t changed much since the announcement that Microsoft was buying a minority share in the part of the company that makes the Nook e-Reader, but if the signs being reported in advance of this week’s quarterly fiscal results at Barnes & Noble are right, Microsoft is about the become the proud owner of almost nothing. Barnes & Noble, it seems, may be throwing in the towel and discontinuing production of the Nook.

What does that have to do with Influency? Everything.

In ways that it’s likely nobody saw coming when we all started using computers and Microsoft became dominant in the document-creation space, the business of media production and consumption has changed. Media is everywhere, in our pockets, on demand. The truth is that as more and more of us start using SmartPhones and Tablets the dedicated e-Reader—a device that didn’t even exist five years ago—is becoming obsolete.Other than Apple, almost nobody makes money selling hardware; it’s the software and services that go along with hardware that create profit.

But if you’re Barnes & Noble, and you’ve created a proprietary channel to sell your proprietary e-books into and then you stop making those devices, you have nowhere to go.

Media is becoming an ever-more-complex business, and we’re all in that business, now. What that means is that to succeed you must use open standards. Unless Barnes & Noble has convinced Amazon to abandon their proprietary data standard and delivery mechanism for Kindle (and I promise you; they have not), then by abandoning the Nook hardware they’ve abandoned the entire e-book market. Hello, Amazon? This is Barnes & Noble. We give up. You win.

What’s even more amazing is that Barnes & Noble is getting picky about which “real” books it sells!

Business Change is everywhere, and we’re “right there” in the Answer Guy Central 3.0/Influency switch-over; get ready to get busy upping your Influency. Barnes and Noble, that means you, too.