WHAT HAPPENS When You ‘Build a Web Site in One Hour’ ?

You can build a web site in an hour, but it’s a very bad idea. On the other hand, if you talk about building a web site in one hour, enough, in the right way, and in the right places, people notice. And Google notices, which is equally—maybe more—important.

Now, let’s dissect, and maybe even undo that last part of what I said.

Google says that when you create content you need to make it attractive to people, and that attractiveness to Google will follow naturally. Sure it will; all you have to do is create content that rivals the volume and quality of mass media outlets spending ten of millions of dollars per month, and you’ll be golden.

What’s an Influency seeker to do?

When you create content, you need to see to it that it gets noticed. About a month ago, I started talking about the idea of building a web site in an hour, and in The Answer Guy’s Daily Influency Videos our robotic friend Bob has been breaking that idea down, bit-by-bit. Truth is, you can’t build a web site in one hour—at least not one you can use for Influency purposes.

Bob refers repeatedly to one very popular build-a-web-site-in-a-hour video in our “oh no you can’t” series of videos. This morning, I started poking around, and while that video is dominant in search results for one-hour-website content, Bob’s series of Build-a-Web-Site-in-An-Hour Videos is coming on strong. How strong? Take a look: 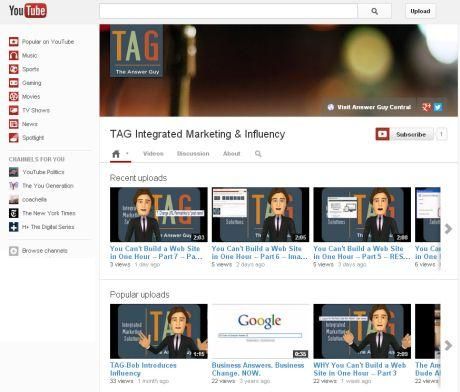 None of these search result numbers seem extraordinarily high, unless you consider this: our build a web site in one hour videos are ranking as high as number 7 after only a few weeks, and none has been viewed more than a couple of dozen times. And the trend is heading sharply in the right direction:

YouTube’s video views count is too low, by the way, but that’s a discussion for another day.

Unlike ‘Influency’, a word people sometimes believe we made up, despite which it took us several months to get decent rankings on, the phrases ‘build a web site in an hour’ and ‘build a web site in one hour’ are real-world search queries. They’re part of our long tail, but they could just as easily be main marketing focuses. So how’s it possible we rank that highly, and that densely, that quickly?

Is it our animated talking head, Bob? Over time, it will be; we construct those videos very carefully, and Bob could be a draw—but as I said, so far there’s no real traffic to the videos. And I’ve been clear about the very idea of the talking head video; it’s not generally the right way to do things.

Are we cheating? Not even a little; we don’t do Black-Hat Stuff here, and we don’t practice Black Hat SEO for clients; our search engine optimization is clean.

But we do some cool stuff in the Answer Guy Daily Influency Videos that you probably wouldn’t think of if you didn’t spend your days pondering Influency. Et voilà. Influency.

If you follow along with our Daily Influency Videos you’ll probably be able to figure all of this stuff out for yourself. On the other hand, you’re busy, right? Say hello, and The Answer Guy will get your Influency started, for you.