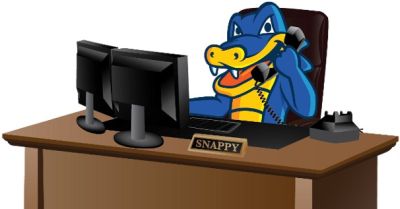 I hate this story.

I hate it because of how it got started, how it ends, and how I spent way too many hours over the last couple of weeks and especially the last couple of days. I hate that I’m not doing business with the Snappy Gator you see above.

A couple of weeks ago, when almost everyone running WordPress sites was attacked by a network of 90,000 bad guys, I gave serious consideration to leaving the hosting company where we’ve housed Answer Guy Central for nine years. Nine years is a long time; I never gave this serious thought before, because the hosting we get is good, cheap, and works in a way that makes sense. We almost never go down, and have never had a serious problem of any kind. Nevertheless, in the process of diagnosing the the WordPress hack that was slowing down Answer Guy Central and millions of other web sites, we came to the conclusion, based on issues with customer service and business process, that it might be time to move on.

If there was a Customer Service Wall of Fame here, we might need to name it for HostGator.

But we still aren’t going to be moving Answer Guy Central or the rest of our websites to Hostgator, because no matter how good your intentions are and no matter how much effort and money you build into your customer service offering, it ultimately means nothing unless customer service includes the ability to cut through problems. THAT’S Influency.

When we started talking with Hostgator about moving, we gave them the opportunity to sell us on more firepower than we’ve been using. But despite Answer Guy Central drawing more traffic than approximately 98.7% of all the web sites in the world, our traffic, at several thousand pages displayed each day, is still fairly insignificant when measured against a computer’s ability to serve it. The sales guy at Hostgator listened as I described my willingness to “buy more”. And then he turned me down, steering us to one of HostGator’s least expensive hosting packages.

And right then, this got interesting.

Hostgator, a hosting company with several million web sites under management, nevertheless promises “free migration” to them for new customers with existing web sites. There are a few potential gotchas in there, but between my salesperson and the Account Manager that Hostgator assigned to us—a young lady who actually turned out to be a customer service focused account manager and not merely another sales person—I got HostGator’s commitment that everything would be moved to HostGator and set up to work exactly as it does now, for free, by HostGator.

This is not a small undertaking. The PC-VIP family of websites includes about ten properties, most of which are set up in Content Management Systems like WordPress. This means that moving our stuff to HostGator involves not merely copying files, but also moving and configuring databases. There’s also the matter of keeping e-mail running, and because of the way we handle our e-mail this was a bit complicated, too. HostGator promised to do it all.

And they did. But it didn’t work right, despite my having provided very specific instructions and a set of requirements that included the order I needed things done in to ensure that nothing went wrong.

If our requirements were more “typical”, there would have been no problems. As with Hubspot, Hostgator is about as good as it gets so long as you fall into the correct categories. They have their act together on the right way to run computers and especially a hosting environment based on strict adherence to a concept called inheritance. But as happens at most companies that grow to the point that business systems designed for “efficiency” instead of customer service take over the way things run, Hostgator was simply not prepared to do things our way instead of theirs. And because we weren’t a typical company setting up our first web site, that became a big problem.

We didn’t ask Hostgator to break their server inheritance scheme. We never would; the systems stuff that happens behind the scenes inside computers has to be properly constructed and adhered to, or things break. What we did ask was that Hostgator do several things that most new clients don’t get, and to do them in a specific order, and what’s important is that Hostgator agreed to all of that and reiterated their agreement several times over the nearly two weeks that passed as we worked our way through things. Again, that’s great customer service; Hostgator bent over backward to make us a happy new client.

But there came a point where we needed to talk. Not email back-and-forth. Not work through Hostgator’s very good ticketing system. Talk. Work out a couple of things in real-time. We plodded through things the way Hostgator does them right up until the point that it was time to ‘throw the switch’, and then asked to speak with the migrations specialist handling our move.

A request which received a new replay through the Hostgator ticketing system, from a new specialist. We had gone too far. Hostgator go boom.

Our account manager worked very hard at all facets of this, and tried to get the backroom guys to step up. No luck. Despite her doing everything she could think of to complete our migration, including asking the server guys to get with us directly, there came a point where business process won out over customer service. Not “break your servers to do something special” business process, but “talk to a customer and let’s get him going on the plan he contracted for two weeks ago and we promised would be set up in three days” business process.

Big companies, as I said above, put business processes in place to keep themselves running. Some people just don’t talk to customers (this isn’t OK, it just ‘is’). But had Hostgator not promised to do all the work, but instead left it to us to manage for ourselves, we still would have hired them, would have done everything ourselves, in a couple of days, and moved on with our relationship, probably for the next nine years. We would have recommended them to clients. And we were clear about all of that. Instead, we wasted two weeks and a bunch of hours on both Hostgator’s side and ours, and ended up with nothing.

All because Hostgator’s migrations team wouldn’t talk to me even though sales and service knew they needed to.

But I don’t think so.

This is a story about a great company that’s gotten so focused on what it does well that it’s forgotten to keep an eye on doing the things it needs to improve upon. It’s a story about expectations. And about being careful. It surely isn’t about the folly of building a web site in one hour.

It’s a story about a missed opportunity to improve Influency. Sorry about that, Hostgator.

And speaking of Influency, look at this: another hosting company has already started running advertisements against this article. Hey iPage: think you can do better? 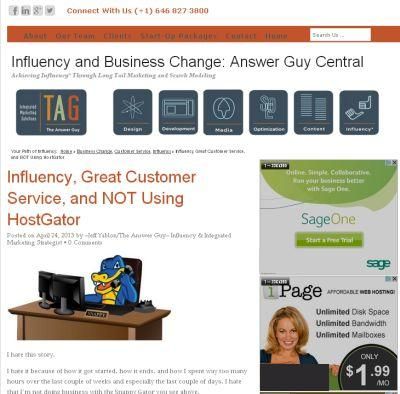