Can Yelp Make Influency With ‘WordMaps’ that Find Hipsters? 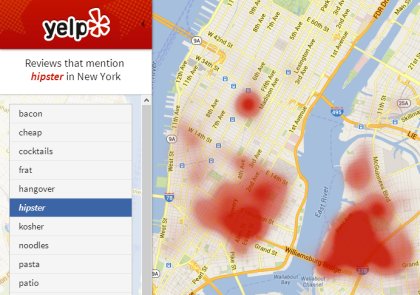 When Google bought Zagat, Yelp found themselves with a big problem. With or without the issues surrounding the quality of Yelp’s reviews,  when Google enters your business space, it’s time to get creative, or get dead. This week, Yelp unveiled a new tool that they’re hoping will boost their Influency. And while Yelp WordMaps are worth a couple of minutes and a chuckle, if this is the best new Influency move Yelp has up its sleeve, I’m leaning toward “dead”.

The idea behind Yelp WordMaps is—or ought to be—simple. By cross referencing Yelp’s reviews by location and keyword, you can see, right on a heat-map, the places where you can find Yelped places. Never mind that the list of words you can search is limited; Yelp’s put together what I’m guessing are the most popular search terms from their vast data store, and  they could open up Yelp WordMaps to user-selected terms at some point.

The problem is, Yelp WordMaps Don’t Give You Any Useful Information.

Unlike WeePlaces/FourSquares Lesbian Bar Finder, where heat-maps can be used to find live trend densities for specific purposes that might mean something, the idea that groupings of venues popular with people with hangovers, or neighborhoods full of places that hipsters like, just doesn’t mean anything. You know, unless you want to go watch people vomit, or be cooler than you.

And seriously: if you didn’t already know that hipsters hang out on the Lower East Side of Manhattan, and the Williamsburg section of Brooklyn, the hipsters have no use for you, anyway.

Here’s a quick video we’ve put together to let you see the results for all of Yelp’s WordMaps in New York City:

I suppose there could be some value to Yelp’s bacon heatmap if you were looking to spend a day doing damage to your arteries as efficiently as possible, but otherwise, none of this says anything. Yelp, are you planning to do something with WordMap HeatMaps that make having them worth your effort?

In other words, getting people to your web site is only the beginning of the Influency equation. Yelp has no traffic problem, and potentially WordMaps will add more traffic to their hoard, but the people who land at Yelp looking for or at WordMaps will be amused—but not engaged.

Want to talk about real engagement and Influency? So do we. Hey, Yelp? You were almost better off when the worst problem you had was the question of whether you were in the extortion business.