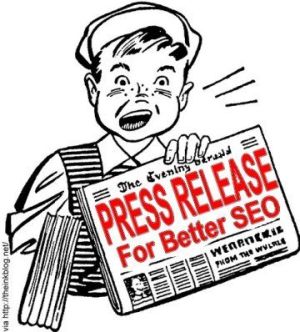 Remember this?: Extra! Extra! Read All About It!

If you want to stay on Google’s good side, start thinking of such self-promotion as ‘not allowed’.

As with the idea of self-promotion and the tightrope you might feel as though pursuing it well feels like, this is a complicated issue. And if you can get past the feeling of vertigo that watching this rebroadcast of a Google Webmaster Tools Hangout Video brings on, you can see the whole story. But the short of this is that John Mueller, a Googler based in Switzerland, went on the record yesterday as saying that Google expects you to NOFOLLOW links in press releases.

And what that means is why this is incredibly difficult to handle (and of course why you contact the Answer Guy to manage your Influency*).

I mentioned this less specifically a couple of months ago when I quoted Google SPAM Guru Matt Cutts as saying that advertorials you post need ‘not to float PageRank’. Go back and read about PageRank here, but the shortest possible explanation of PageRank is that it’s the very heart of what Google’s search algorithm is based on. And as Search Engine Optimization has become less and less effective as a stand-alone marketing strategy, Google’s protection of PageRank has become an ever-larger part of its overall strategy.

Which creates a bit of a problem. And no, not a “this stuff is getting harder” problem. More like “these rules are getting really hard to understand” issue. What does Google mean when they say that press releases should have their links NOFOLLOWed, and who’s responsible for making sure that rule is <ahem> followed, anyway?

Back in the day, this didn’t matter. Press releases got printed on paper and mailed, or as time passed faxed and then emailed. Your job as a marketer sending out a release was to get the people you sent it to to write stories about your news items. But this has changed. News has a shorter life cycle and the people who create content for the largest news disseminators work under such tight time constraints that often they simple take your press releases, republish them, and call that a story.

So whose story is that? Is it yours, or is it theirs? And more important,

If you send out a press release with links embedded in it and they get republished, who ‘wrote those links’? And who formatted them? And who gets penalized if Google doesn’t like them?

The problem is obvious, right? Google is making you responsible for things over which you have no control. And you don’t have the option of declining said responsibility! Optimization just got a lot harder.

If there was a reliable way to manage this issue I’d say it was no issue at all; it actually makes more sense than a lot of the changes Google makes, and the short phrase “because that content is really just advertising, that’s why” covers it. Given GOOG’s previous stance on advertorials, they’re being consistent: “advertising is not content”.

On the other hand, it’s not right to have to tell Google “hey, this is advertising” with the consequence of failing to do so being that something ELSE of yours will be penalized unless you do. That’s like being asked to prove a negative, which simply isn’t possible.

Uggh. This made me think about a piece I wrote a couple of years back, NOFOLLOW IS THE BANE OF SEARCH ENGINE OPTIMIZATION. And thanks, Google; today I realize just a little bit better how correct I was.

Don’t worry, by the way; we’ve got you covered. Just contact me here and we’ll begin getting your NOFOLLOW issues managed and your Influency moving—and staying—where you need it to be.