Where Do Privacy, Piracy, and Influency Merge? Ruth Vitale 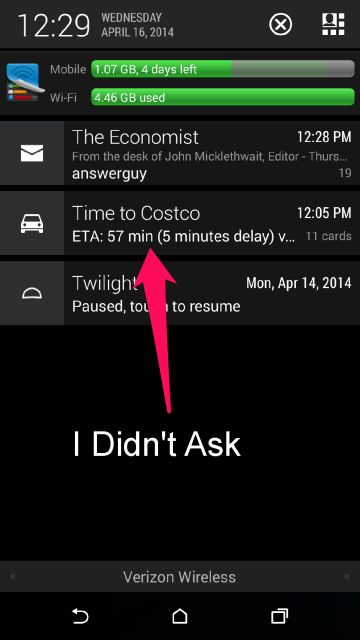 I’ve made no secret of my feelings about the manner in which most media businesses conduct “business as usual”.

As business changes and we all learn new ways of doing business, I find myself more and more concerned with the matter. This was one impetus behind our creation of Video Network One ; despite strides made by artists finding new ways to be compensated for their work, many of the issues that have plagued the media business for decades persist.

And then, there are the new issues.

With pretty much all information (i.e., media, i.e., software, i.e., everything) being online, we’re starting to see issues like what you see here. Last week, without me asking anything that should have tipped an intention to shop, Google Now informed me of travel time to a Costco warehouse I sometimes visit.

This bothered me even more than the time Google Now told me about a big price drop in a stock I own. At least then, there was a trigger; I had told Google I owned the stock and there’d been a big fluctuation. This time, the trigger that caused Google to “helpfully” let me know travel time to the Costco in Wharton NJ was something called “Wednesday”.

Got that? I’ve been to Costco on Wednesdays enough times that either because I’ve asked directions or because Google Maps and my phone’s GPS have placed me there, last Wednesday Google assumed I’d be visiting Costco. And I wasn’t so much as traveling in that direction … or any other.

Now, let’s talk about where Influency, information and privacy intersect. Let’s throw piracy into the mix, too.

Let’s start out by acknowledging something I’ve written many times: I use Google’s many services fully aware that they’re watching me when I do so. And if I’m willing to reduce the efficacy of those services I can—if Google is to be believed—also reduce what Google knows. I approach the issue pragmatically; I see the trade-off as acceptable, made more so by an understanding that even if Google doesn’t know everything about me someone does. Paranoia about privacy isn’t productive unless you go completely off the grid.

So, Minority Report-esque issues notwithstanding, where does all of this lead, speaking practically?

Answering that leads me back to the media business. With some reports suggesting that we’re consuming media in one form or another for an astounding fifteen hours each day, it’s fair to say that media has become “the most important thing there is”. More specifically, managing media has become the only business issue that matters.

In the course of rolling out Video Network One, I’ve come to know Ruth Vitale, the Executive Director of Creative Future. Creative Future is Hollywood’s new point organization for anti-piracy efforts, and Ruth Vitale is a smart, experienced studio executive.

While I’ve chided the various media businesses for their misunderstanding of the forces reshaping their worlds around them, going so far as to advocate certain types of piracy in the interest of getting these folks’ attention, I also believe that when you create a work of art you should have the right to control the way its distributed and consumed. The issue making this difficult is that people like Louis CK aren’t the only media mavericks. Even old-school execs like Time Warner CEO Jeff Bewkes acknowledged last year, piracy can help a studio’s overall business success.

This came together for me personally when Google Now thought my research into the works of a few bands might indicate a proclivity toward using file-sharing services. As with the stock market and Costco issues I found this unsettling, and if you consider all the issues I’m rolling together here you’ll realize why: The fact that you might be interested in technological tools that are primarily used for sharing things that their owners might not want shared doesn’t make you a bad guy. See all the ‘maybe issues’ in just that one sentence?

And all of this occurred to me because last Wednesday I wasn’t planning a trip to Costco.

Your business is changing, and the Media really is becoming the most important message you have. Want to discuss that? I’m right here.