Ponds, Fishes, and The Influency Advantage of Size 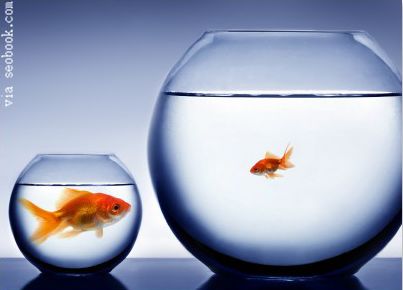 Would you rather be a big fish in a small pond, or a small fish in a large one?

The Internet changes the rules of the game, and with a few exceptions we’ve all been reduced to the status of the small fish—and there’s only one pond. But there was a time when being a big fish in a small pond had some real advantages.

When I did radio as The Computer Answer Guy, I broadcast my program from a small station in New Jersey. Note the wording of that. The guy who owned the station broadcast me over airwaves he owned to a small radius of terrestrials, but it was through my business that The Computer Answer Guy was broadcast to listeners on the other side of the world. The radio station owner was the large fish in the small pond, and I was the small fish in a large one.

And Norman Worth acted like that big fish, too. He was man-about-town in Hackettstown NJ; everyone knew him, and every time I looked somebody was kissing up to him. It made me laugh and frown at the same time because while my universe was much larger, Norm was a star in his. And Norm Worth sold some of his radio stations and made a small fortune. So I had an international following and a stranger would recognize me in some unexpected place a few times each year, but Norman Worth was … the man—at least in Hackettstown.

I’ll stop short of saying I wanted to be Norm Worth, but big fish in a small pond looked pretty cool.

I’ve long believed that the deck was stacked against the little guy when it came to dealing with Google. That shouldn’t exactly come as a surprise; being the big fish has always carried an advantage and when you’re trying to get a big fish’s attention as anything other than food it’s way easier to do so if you’re a big fish, too. But whereas technology is an equalizer of sorts when it comes to things like search engine optimization, having more people to do more work will still give you more of a chance to get things done. That’s not news, and not surprising; when you’re little, “work smarter, not harder” isn’t just a cute idea, it’s the only way to survive.

That’s what Answer Guy Central has always been about. It’s what Video Network One is about. It’s my thing. Contact me here if you need help.

Last week, Google signaled their intention to keep small fish in small ponds. Google has unveiled a new advertising option, letting you turn anything you post to your Google+ page into an advertisement. But only if you have at least a thousand Google+ followers.

The idea that smaller companies have different or fewer or less advantageous programs available to them isn’t a new one. But the differentiation is generally based on costs; you can’t always do the things you do for your larger customers for the smaller ones. It’s too expensive.

The other time you do special things for larger customers is when you’re trying to deepen your relationship by giving them something not-just-anyone has.

Google +Post Ads aren’t special except in that you get more control over the way you look when you promote yourself. I can tell you conclusively that as long as your ads don’t cause them problems radio stations don’t care what they say. TV is much the same. So are magazines and newspapers.

If the threshold for being able to run Google +Post ads is a thousand followers, Google isn’t exactly fencing in their best customers. And since Google’s cost for producing a Google +Post Ad for someone with three followers is exactly the same as one from someone with three million this isn’t about cost, either. Put simply, Google is signaling in about as clear a way as they can that if you’re small, your screwed. There’s no other reason to exclude smaller advertisers from Google+ Post Ads.

This isn’t a Chicken-Little-says-the-sky-is-falling story. Work smart and you can still get what you need done. Yes, it’s still harder for the small fish and yes, Google is making it easier for the small guy to become lunch. But that means you need to build the biggest megaphone you can, that your competition is shouting and you need to be doing the same thing any way you can, and that Google is not your friend—and you need to do business with them anyway.

Or as I’ve told you before, self-promotion is a good thing.