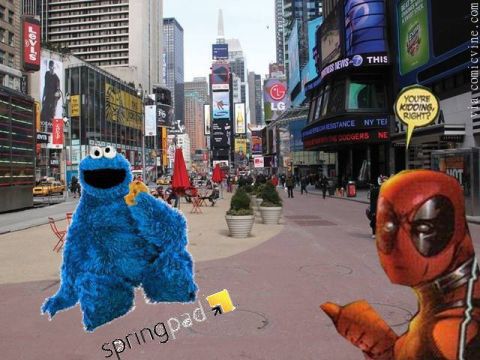 Sometimes in business and Influency the only thing that matters is complete and total dominance. Do a search on the word oblivion, and you’ll find that the 2013 Tom Cruise film of that name dominates the results. Tell Google you want to see images for the word “oblivion” and you’ll see the same. Prepend the search to software oblivion and very little will change. I could go on—I did, this morning, in thinking about this piece—and had to stretch my imagination before I got different results (credit the Marvel Comics character Deadpool; more on that in a moment).

See our friend Cookie Monster bouncing off that Springpad? Springpad users are about to get bounced, too. Springpad, an information-gathering App sporting some interesting organizational features but noteworthy in these parts more for its shady business practices than anything else, has announced that it’s headed toward oblivion; Springpad will enter what folks in the software business refer to as “the Deadpool” in a few weeks.

Unless you’re a Springpad user, Springpad’s demise is less interesting for its pending unavailability than the idea of cloud-based software entering the deadpool. Springpad has provided instructions for migrating to dominant competitor Evernote, but the idea of a piece of software that you’ve come to rely on simply disappearing is scary; Google taught us about this when it discontinued Reader. That so struck people that when Google announced their Evernote competitor, the largest question wasn’t its features but whether Google Keep would be sticking around.

That’s an important issue. While the primary benefit of  “owning” software is your control over its vendor forcing a (paid) upgrade on you, cloud-based software as a service (SaaS) carries the extra risk of what happens if the software simply stops being available. There’s Influency!

This in no way changes my position that you need to get “in the cloud”, if only for the immense benefit of having the stuff you need access to available regardless of the device you use to get at it or where you happen to be. But it underscores the reality that you want to own/be in control of as many parts of your business environment as are practical. Using something like OwnCloud might be a stretch, but where you publish your content is up to you, and the biggest reason that using otherwise-great tools like Medium is a bad idea.

In the end, of course, you very likely can’t just ignore every third-party cloud-based SaaS tool you come across. But you do have the option of managing your tools correctly. And while it’s easier than you might think, it’s easier still to let The Answer Guy do it for you. Contact me here if you want to talk about it.

So bye-bye, Springpad. And hello to a world with one less never-quite-made-it-because-of-botched-influency SaaS tool.