From AAA to ByeByeBye: How SpringPad Made Me Throw Them Away

One of the earliest pieces I wrote here and filed under “business change” was this one about changes made to password manager software SplashID. And while many of the thoughts I pass along are instructional from a cautionary tale/think twice perspective, it’s rare that I out and out say “Holy Cow, You Just Screwed Me And So Now  I’m Done Using Or Recommending Your Product”.

I stayed with SpalshID for a while after that piece was written, but the die was cast and I pretty well knew it had been. SpringPad’s just done something so heinous, there will be no second chances. 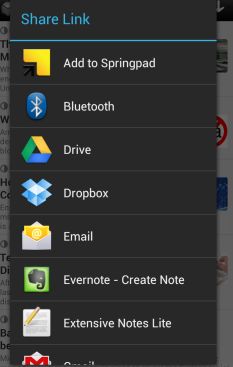 This a screenshot from my Galaxy Nexus SmartPhone, taken yesterday when I decided to forward a news story. If you’re an Android user you’re familiar with the idea of “sharing” something through an App and having an alphabetical list of the ways you can do that sharing pop up.

See the first item on the list? In their latest App update the folks at SpringPad, tired of being buried below so many other choices, pulled the old “start your business with ‘AAA’  to be first in the yellow pages” marketing trick, changing the internal name Android devices use to reference SpringPad from “springpad” to “add to springpad”.

Speaking as a guy who knows something about being mired at the bottom of lists through alphabetic circumstance—and I got to experience those results again just last night when Jason Yablon graduated from high school—I understand not wanting to be “down there”. I also know a thing or three about marketing, of course, and recommend and implement Search Engine Optimization as a replacement for yellow pages advertising every day, so I understand that medium, too.

And SpringPad, by cheating this way and doing it inside my SmartPhone, earned an immediate trip to “uninstall”. The bottom line on this is simple: HOW DARE THEY? SpringPad added nothing of value for me and not only grabbed territory that I didn’t feel they were entitled to—the moral distinction—but also messed up my SmartPhone’s ecosystem and the way I work—the practical one.

SpringPad, by the way, is a competitor to Evernote, and does some pretty nifty tricks that the much-better-established thought saver doesn’t do. I’ve used Evernote for quite a while, and told you it’s one of the most important tools in my bag of tricks in this piece, but I’ve kept SpringPad around in case they came up with a killer feature to get my attention enough to start using them.

In an era where business change is defined mostly by your reputation, and the big game changers give away things of real value, “jumping the queue” is a dangerous way to try and get ahead. AAA Marketing for a free App that places at best a distant second in its category—and by reaching into a piece of my property and changing how it works? Not smart, SpringPad.

Pulse got my attention by being a better newsreader, if in a subjective way. Google Drive will take what business it can from Dropbox by offering more features and tighter integration. SpringPad? Gone forever, by cheating.

Are you practicing safe business change? Drop me a line and we can work through it!