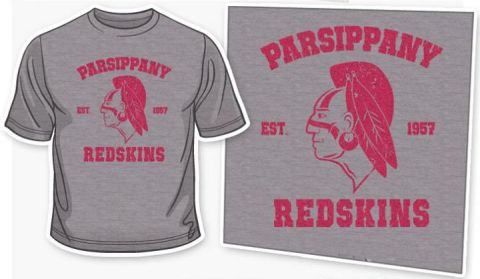 I grew up in Parsippany, New Jersey. I attended Parsippany High School, where, when I was there, the school mascot was the Redskins. Or One Redskin, or something. Each year, at pep rallies and football games, we had a student dressed up as that Redskin character. I think my sister might have dated the guy who played The Redskin during part of her time at Parsippany High School.

I bought my Parsippany Redskins tee shirt mostly because when my oldest son was in high school and his school traveled to Parsippany for a tennis match against my alma mater I’d had the jarring experience of finding that The Parsippany Redskins had become The Parsippany Red Hawks. I asked a PHS student when it had happened and why. It’d been just a year or two at the time and the why was predictable; the Parsippany school district had caved to mounting pressure from politically correct types who have been carping for years about the need to do away with the word Redskins.

I wear that Parsippany Redskins tee shirt. I wear it defiantly. It’s a personal thing for me, both because of my roots as a Parsippany Redskin and because I don’t do politically correct; being told what’s “right” by people who more often than not have no real stake in the question bugs me. Now, courtesy of the United States Patents and Trademarks office, The National Football League’s Washington Redskins have a much larger merchandise issue to deal with than the Parsippany Redskins ever had.

Yesterday, USPTO revoked several eight-decades-old trademarks that the Washington Redskins held on various Redskins-related images and phrases. The rationale for the trademark revocations was that they were offensive trademarks that should never have been issued. I find this fascinating because I’m pretty sure that eighty years ago American society, not yet having developed the politically-correct muscle, didn’t think there was anything offensive about the word “Redskins”. Assuming that’s so, then my reading as an Intellectual Property Consultant is that those trademarks are valid and should be allowed to stand.

There’s a lot that’s going to go on for the next few years or even couple of decades as this case wends its way through the appeals process that the Washington Redskins’ owner has promised to fight, and not only the Redskins but the entire socialistically-organized NFL, profiting from the trademarks held by the Redskins and most of its other teams, have financial stakes in the battle (insert offensive, non-PC ‘tied to the stake’ Redskins reference here).

And here’s what I’m thinking: It’s time for the Washington Redskins to change their name.

And there’s one thing about Redskinstrademarkgate that I actually like. It could spell the end of ridiculous gun laws in the USA.

The argument that in 2014 the trademark overseers at USPTO know what was offensive in the 1930s is of course ludicrous, and I’m pretty sure that historians would disagree with the position USPTO used to revoke the Redskins trademarks. But assuming the Washington Redskins  argue the matter up to the US Supreme Court it will set a precedent whereby a discussion of  ‘what a bunch of long-gone people thought’ becomes a matter of law. And at that point the question of what our founding fathers were saying when they gave us the right to bear arms will start finding its way to the table.

Managing business change is what we do. If you just feel as though a few things in the way you manage your business, marketing, or how you’re getting from here to wherever you’re going need a fresh set of eyes, contact me here.

And keep wearing that Redskins merch.