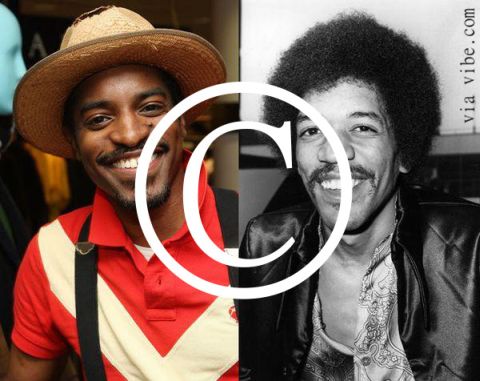 LOOK! It’s Jimi Hendrix, Andre 3000, an attribution for where I found this picture of probably-the-best-left-handed-acid-rock-guitarist-who-ever-lived and the guy who’s playing him in an about-to-be-released-without-the-blessing-of-the-estate-of-the-guitarist biopic, and a giant copyright symbol.

Now guess who owns copyright in this image.

It’s us. Answer Guy Central. We Own Copyright in This Particular Picture of Jimi Hendrix and Andre 3000, even though the dead guitarist’s estate, the very-much-alive rapper and actor’s business advisers, and VIBE magazine would probably each take exception to that.

Who wants to object first?

Let me be clear: Jimi Hendrix’ estate has every right to the commercial use of his image, Andre 3000 to the use of his, and Vibe magazine to the combined image of the two men, assuming they created it. I’m claiming copyright only to this image, a derivative work created to make a specific point and one that couldn’t be made without creating the work. I’m comfortable doing so because both Mr Hendrix and André Lauren Benjamin (Andre 3000’s real name) are public figures, I’ve credited VIBE as the source where I found the combination image, and I added the overlaying © symbol, thereby creating a new piece of … <ahem> … art. We own this picture of Hendrix and 3000. The copyright is ours. BWAH-HA-HA!

Yes, I have a bigger point to make.

This week, a record label filed a very large lawsuit against a popular YouTube star. Put aside the fact that at least one artist whose music “is being infringed upon” actually supports the use of his art in this way (and yes, put it aside; his record company owns the rights—not him), and you’re left with a lot of questions that artists who produce work independently generally aren’t equipped to deal with.

Not incidentally, this is the reason we launched Video Network One.

I’d love for artists like Michelle Phan to beat a path to our door, but let’s talk about the business process issues. As the Internet becomes a ever-larger piece of reality, copyright is looking like more and more of a mess. My copyright claim on the picture of Jimi Hendrix and Andre 3000 is real and based on a concept know as fair use, as is our position on the way we use certain images at Answer Guy Central. We don’t claim copyright in the underlying work or ownership of Jimi Hendrix or Andre 3000’s images, merely the derivation. Here, coincidentally, is an article also published today including a link to what fair use “sort of is” under existing copyright law.

This stuff is complicated! How complicated? I used Jimi Hendrix and Andre 3000 as my illustration for the issue because owing to that issue between Hendrix’s estate and the producers of the movie in which Mr. Benjamin is playing him, none of Jimi Hendrix’s music is being performed in a movie about the life of Jimi Hendrix.

And like most content marketing issues, this kind of thing can’t be managed without enacting and implementing full-on business process.

‘Nuff said? Not nearly. “Nuff said for you to contact the Answer Guy about Intellectual Property and Content Marketing? You bet.