The Guardian (Design is Dead) 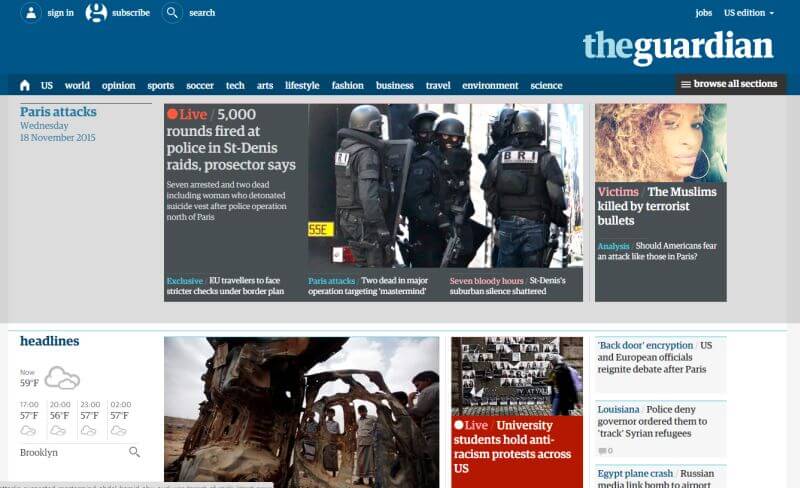 A couple of months ago, we told you that design is dead. This isn’t strictly true, of course, but in large part the proliferation of Internet content and the ways it’s produced has homogenized content to the point that the idea of design being dead has some validity. Ask The Guardian.

Our most recent re-design here is one we’re proud of, but it’s also a prime example of the “design is dead” mantra. We used a theme from Themify to build Answer Guy Central 2015, and it’s an example of something we refer to as the Divi-ization of web design; everything is banded, and reproducing almost anything has become almost trivially simple.

Including the web sites of big newspapers. Welcome to the marginalization of The Guardian.

Who Owns The Guardian’s Design?

Tricky question to answer, until you realize the answer doesn’t much matter.

The Guardian, not surprisingly, disagrees with that. They disagree so strongly, in fact, that when someone wrote a tutorial explaining how to replicate The Guardian’s web site using Themify’s free FLOW framework, The Guardian demanded that the tutorial be taken down—and Themify complied.

If you take a look at the image above and used the “everything is just banded content” viewpoint, it becomes difficult to see The Guardian as having done much of anything special in “designing” their site. Their logo is theirs. They may have designed custom fonts, but otherwise? Nothing.

That’s not really nothing, of course, but even with the idea that their font and logo deserve copyright protection acknowledged, design of The Guardian’s website is neither unique nor interesting enough to argue over.

That said, what I find most disturbing is that Themify gave in. Talking about how easy it is to copy a site isn’t the same as doing it, any more than explaining how to build a bomb is illegal—even though actually building it might well be. Sadly, Themify didn’t even archive the page before erasing it; it’s gone.

All of this is a discussion about content and getting noticed. In a world where design is dead, that’s getting harder every day. Need help? It’s why we’re here.

I sure hope The Guardian doesn’t complain about us screen-grabbing their site. Of course, having altered the image enough to make it unique for use at and by Answer Guy Central, there woudn’t be a real argument anyway.