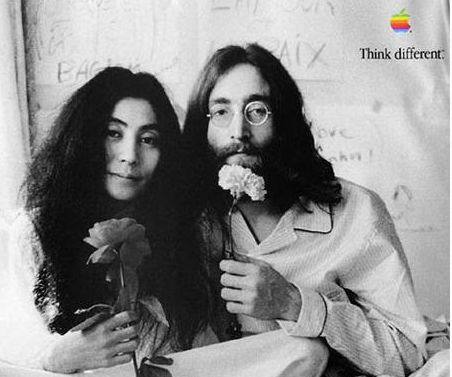 Fourteen years ago, Apple made John Lennon Think Different, immortalizing him in a poster-and-TV-commercial advertising campaign. Yesterday, on the thirty-fourth anniversary of The Best Beatle’s death, Apple decided that thinking different was no longer important.

Apple discontinued their Think Different ad campaign a while back. But by welcoming Bose products back to The Apple Store, Apple’s decided that Think Different isn’t just a marketing slogan from yesteryear; Think Different just became the opposite of Apple’s approach to retail; Think The Same is the new Apple way.

So Did John Lennon Think Different?

That’s a dumb question; John Lennon thought about as differently as anyone could. And although I’ve made my general disdain for most things Apple clear it would be silly to suggest that Apple was ever a same-thinker; the beast of Cupertino has turned out some of the most innovative consumer products ever to grace a desktop, pocket, or the sleeve of a jacket.

While they never specifically said why, it’s pretty clear that when Apple stopped selling Bose audio equipment a couple of months ago it was because as the new owner of Beats Apple saw selling a competing product as … well, stupid. The marketing world has recently stopped seeing things that way; whether a function of coopetition as a basic theory or a simple chase for advertising dollars at any cost, recent trend has been that you sell anything that will make you a buck. You’ve seen it; television programs are now supported by advertising for other programs on other channels.

Apple just started selling Bose again. There’s no need for a rocket-science level of analysis on this; with a couple of months of sales data and Christmas around the corner, Apple realized that they were leaving money on the table by refusing to sell Bose gear.  And with Bose—like Apple’s own goodies—rarely sold at a price much below retail, it was a match made in heaven. Bose is back. Think Same.

Believe it or not, I’m not picking on Apple; I’m praising it.

Just as “good enough” really is sometimes good enough, there comes a point where even the best marketing company ever does marketing the same way as everybody else. And Bose audio equipment doesn’t take away sales from Beats because pretty much anyone looking to buy Bose wouldn’t consider Beats.

Ok, so maybe I am picking on Apple. Just not for this move. After all, this is the company that so misunderstood social media it spent a hundred million dollars to force an album down the throats of about a bazillion people who so didn’t want it Apple then had to write special software to take it back.

As for you … are you ready to Think Different, and embrace the reality that even “think different” means something different than it used to?