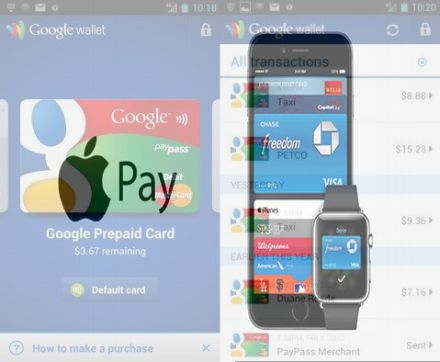 When Google Wallet launched, I wrote a piece suggesting that it was a solution in search of a problem—or at least, the wrong solution to the wrong problem.

When Facebook and Google started looking like pretty much the same thing, I suggested that the two monsters of Internet life had merged, ending privacy permanently.

I’ve pointed out how little real value is delivered when your bank “gives you something”, and bemoaned the demise of a perk PayPal stopped giving away.

And when Apple buried the announcement of Apple Pay in their ill-fated deal to force U2 on every iTunes user, I told you that Apple’s new payment service was far more important that the music of an aging and all-but-irrelevant rock band. I called Apple Pay the new iTunes.

There is no Google Wallet Apple Pay Isis Softcard, nor has some no-way-Apple-is-interested-in-this merger created Google Wallet Apple Pay. But the effect may be the same, and that’s a win for you, if another step away from any semblence of privacy. Today, Google announced that they’d bought some of the technology in Softcard née Isis, as well as reached agreements with the major US cell carriers to install it on their handsets.

The irony is fantastic. Google Wallet was dead on its arrival specifically because getting Google Wallet onto many phones—especially those from Verizon Wireless—was like playing the world’s most frustrating game of Whack-a-Mole. But Apple introduced Apple Pay, the phone carriers realized they had SoftCard headed nowhere, and like magic we see a Kumbaya moment mere months later.

Laugh at Verizon Wireless if you like, or praise Google’s persistence, but neither is the point. The point is that Apple has managed to make tap-to-pay relevant where banks, phone companies, and the world’s near-monopoly in both search and on-line advertising could not, because as I’ve told you for years now, Apple is a marketing company. A GREAT marketing company.

Get ready for your phone to become your wallet. Google Wallet Apple Pay … what took you so long?