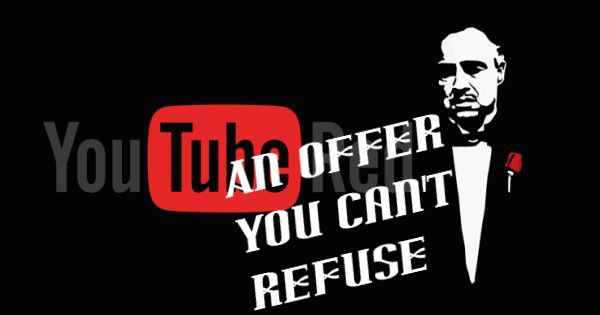 Over forty years ago the Corleone family make a few offers that couldn’t be refused. This week, Youtube proved who’s the Godfather of the Internet.

Youtube Red is coming next week, and it’s a big deal; opt for YouTube Red over the Youtube you’ve been using for about a decade and you’ll be able to see videos without advertisements (more on that in a moment), save videos for offline use, and get access to both Google Play Music’s full streaming library and the original video programming that Youtube has in production, all for the same ten dollars per month that Play Music costs now.

And that’s not even the story that matters for Youtube Red.

With Youtube Red, Alphabet creates a huge problem for Apple’s iTunes business model. Why? Because if you buy YouTube Red as an iOS App, you’ll pay an extra 30% to cover the fee Apple charges all app developers.

That might mean that iOS users will stay away from Youtube Red, but I doubt it. And the irony of Youtube Red being the disrupter of Apple’s 30% developer tax when Youtube charges video producers a 45% tax to run advertising campaigns is pretty amazing. But there it is.

And then, the Youtube Red business model gets even crazier.

Oh yeah: and if Youtube Red allows video downloads, there are going to be some major copyright questions to be answered.

You still need to be producing video for your business website. And maybe Youtube Red is the service that finally pushes you over the edge toward paying for the hours of background noise you consume each day.

And those two statements are at odds. Wanna talk about it?