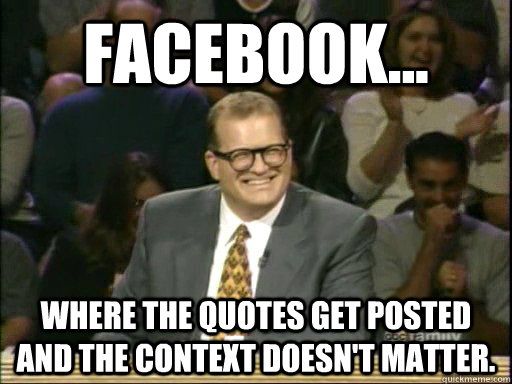 In what seems like a long-ago time, before the phrase “President-Elect Donald Trump” was even fathomable, this piece on Post-Truth Politics ran at The New York Times. My immediate takeaway was that in the era of Post-Truth Politics we’ve reached a point where context doesn’t matter.

This is a horrifying thought for me, and I presume for you, as well. Context does matter, and any intimation that context doesn’t matter feels like the start of a trip down a road to total non-communication.

In politics or otherwise, this is not a trip you wish to take.

Right now, the Facebook/Context Doesn’t Matter meme I’ve re-posted here seems especially apropos. Facebook is a huge echo chamber; you hear (almost) exclusively the voices of people who think like you do. And while “people who think like you do” is by definition “context”, it’s not meaningful; you can hear those thoughts all by yourself. No other voices matter, nor need speak out!

Mr. Trump’s latest silliness on Twitter claiming that millions of votes received by Hillary Clinton were fraudulent is a great example. If you live on his side of the world you very likely accept it as fact even though it’s not. Just as sadly, if you’re anti-Trump you likely would reject the idea even if facts backed it up.

The Context Doesn’t Matter. Actually, other than “Donald Trump’s Ego Is Too Large Even For a President” there is no context. At all.

Our second-most-popular article of all time (it should become number one in the next couple of months) is one I wrote in January 2011. It has nothing to do with business, at all. I’d just come across a very sad story that was finding its way around the Internet, and it struck me enough that I penned this story about the Saddest Suicide Note Ever. Over the entire life of Answer Guy Central that story has garnered over 10% of our traffic and has grown almost 100% since last year—after similar growth each year since it was published.

Which means it gets read a lot. Which means I want to find a way to capitalize on that traffic. There are over 1100 articles here; you do the math.

Most simplistically I could use that piece as a stellar example of Search Engine Optimization; if you search Google for “sad suicide note” there it will be. Even searching more broadly for “the saddest thing you’ve ever read” will get you here.

Both because I say “yes, it does” and because Donald Trump only bothers me more as time goes on, the answer is of course it matters. But man … it’s quite a target so I’ve come up with an answer. Visit that page and see if you can figure it out. Or if you prefer, rant at me here.