The Donald and The Actress (and The Mouth) 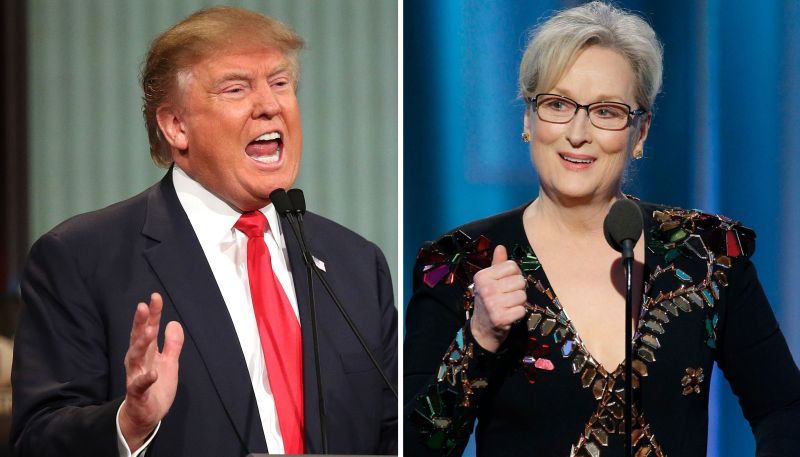 This morning it all came together for me, courtesy of The Donald The Actress and The Mouth.

I don’t much care for awards programs. By definition they’re self-congratulatory, don’t much impact my life and aren’t terribly interesting. But I happened to catch a big piece of The Golden Globes last night, saw Meryl Streep take down Donald Trump without ever using his name, and thought it was pretty clever.

Until The Mouth jumped in. And then we were all schooled on The Donald and The Actress by an unlikely source of reason.

This story at Mashable includes a Twitter back-and-forth between man-on-the-street funnyman Billy Eichner and Meghan McCain, not generally a person who speaks to the issues that left-leaners heed. But take a close look, and give it some thought: Billy-on-the-Street’s rave for The Actress’ words on The Donald perfectly underscores why Donald Trump is about to become President.

While I’m not OK with the idea of President Trump (and this goes way outside the issue of What Donald Trump Doesn’t Understand), The Donald and The Actress as explained by the Conservative Politician’s Daughter cuts to the heart of why Mr. Trump is about to be the most powerful man in the world. As edited by The Washington Post—presumably to comply with copyright rules—here’s Ms. Streep’s speech:

The Actress was topical. The room she was speaking to seemed to enjoy not only that it was her speaking, but her message. It takes very little thought to understand what she was saying and she never mentioned The Donald by name.

And Meghan McCain is exactly correct: this kind of presentation by not-Trump is what got The Donald elected.

This post is a story about understanding your audience and speaking to them. Hillary missed that boat. Meryl, preaching to the choir in their language instead of words 20 million outsiders could relate to, did too.

The Donald and The Actress

I’m not making a basket of deplorables joke. Hillary Clinton lost the 2016 Presidential election less because there were a lot of angry people than because she spoke too obliquely even for the “educated liberals” who made up her base. Yes, the Donald and The Actress have different natural fans. But the issue is less about what you say than how you say it.

My one foray into local politics in 1994 taught me that I speak to a small audience. My time as The Computer Answer Guy was another example of that, even though I was seen on national television and was listened to worldwide. You’re smart, educated, and always questioning how things are and how they can be made better. You get this.

Knowing who you’re speaking to matters. Sloppy communication is a problem even when you’re Oprah. Taking the high road sounds great, but sometimes it misses your target. Understanding the difference is where The Donald and The Actress approach this differently.

You know who your audience is, right?