What Bosses Do In ‘Business Change’ 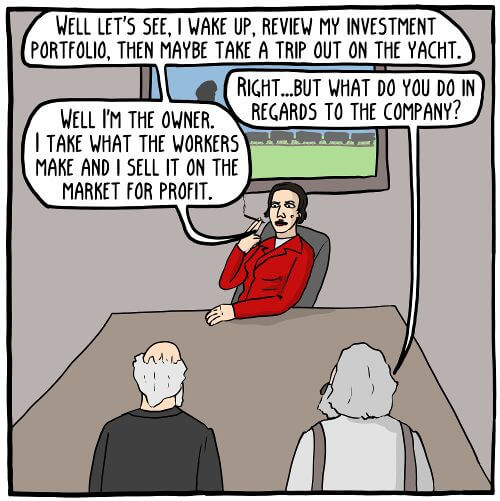 Tomorrow’s the big day. This man becomes President of The United States, and we all ask in unison what he will do next. Which has me thinking about what bosses do … you know … ever.

The picture atop this page is pulled from a strip at Existential Comics (we’ve saved it here, just in case the link ever goes bad). I’m a boss, and a capitalist, so please don’t get me wrong; I’m all for reaping profits I create. But I also know bosses who think the way this one does; she’s Ayn Rand incarnate. In fact, our friends at Existential Comics acknowledge that this boss is Ayn Rand:

Ayn Rand is representing in the capitalist business owner. She developed a highly nuanced philosophy based on the fact that society is divided up into two categories: “producers” and “moochers”. “Producers”, despite what you might think, aren’t the people who physically produce things, but actually the people who hire people to physically produce things. Moochers are, well…people who are lazy? People who get government subsidies? Something like that.

I consult to a few Randists (Randians?). They aren’t bad people, necessarily, but Ayn Rand lovers’ way of thinking is in trouble.

Before we continue, let’s remember that Ayn Rand wasn’t a philosopher, but a writer. Or at least that’s how she started. Rand’s writings were dropped in the right place at the right time to be echoed as philosophy, and thus boosted to that higher level. When pundits are recognized as such in their own lifetimes, that’s generally how it happens. 1940s and 1950s America was capitalistic, baby, rife for a philosopher to rally behind.

Speaking as a capitalist, I see its flaws. Just as communism works until someone seeks to be a bit more equal than others, capitalism works until rampant disproportion sets in. Donald Trump is the living embodiment of disproportion. I don’t know the man, but I do know he’s an Ayn Rand fan.

The ideal, I suppose, would be something best named compassionate capitalism. I have clients who believe in that, as well. In fact, I have clients who fit the Ayn Rand mold but believe they are compassionate capitalists. Some even get close. Problem is, just as Reagan Democracy is a bit of an oxymoron, so is the idea of Randian Compassion; sooner or later you have to find your real philosophic center.

As we move deeper into the 21st century, this put up or shut up ideal will matter more and more. You can be  Donald Trump and succeed wildly, but the masses will eventually figure out that what bosses—at least what Randian bosses do—is suck their blood and give very little back. That’s what matters starting on January 20 2017, and it’s what matters in your business. Your employees are smarter than you realize, even if only because they have the same Internet you do.

What are you doing about being ready for the day that happens? Feel like talking about it now, before it’s too late?