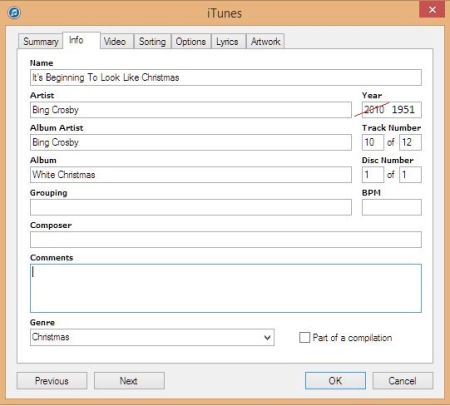 This week, Google gave away Bing Crosby’s It’s Beginning to Look Like Christmas as one of their free-song-of-the-day tracks on Google Play Music. It’s the right time of the year to build a Holiday music collection, and Mr. Crosby’s White Christmas album is a classic. Just one problem: Google claims their gift was recorded 2010. Bing Crosby singing anything from White Christmas in 2010 would have been quite a trick; Der Bingle died in 1977.

Bing Crosby actually recorded White Christmas in 1951. And in most regards the fact that Google got this fact wrong isn’t a big deal. But  … not really; database software like iTunes (yes, I just called iTunes ‘database software’) tracks data points like ‘year’, and being able to play back, for example, all your music from a particular decade is a very real example of how people use database software.

Google has a data problem. And that’s an Influency problem. If your customers get data from you and realize your data is no good, you’ll lose their trust and they’ll get that data elsewhere. In Google’s case, of course, there are a lot of other paths to Influency, but for the rest of us? Not OK.

Remember, though, that besides giving away a bit of music on Google Play, Google sells a tremendous amount of music and other media, and ‘small’  mistakes like getting the wrong year on a classic Christmas ditty by Bing Crosby—or large ones like refusing to track album information correctly—are enough to keep people buying from formidable competitors like Apple—or even worse, chasing people who would have done business at Google Play over to Apple’s iTunes store.

All this week I’ve been writing about different elements of Influency. They’re all “small”, and as I said above the Apples and Googles of the world don’t have to worry about them But for just about every other business, Influency requires a razor focus on everything. Understanding email’s reduction to nothing more than another stream? Huge. Google’s search algorithm being Jewish? It matters a lot more than you might think. And Ashton Kutcher and Social Media Influency? Silly, for sure, but still important.

And Bing Crosby and Google’s issues getting Play Music data correct? If you aren’t sorting or playing music by year, it might not matter to you. But to make Influency happen you need to anticipate what clients and prospects are thinking—and be there with solutions to what often feel like huge problems.

Wanna talk about it? Me too.