Like Angry Birds, Runkeeper Goes Free. But It’s Not The Same

Welcome to the Internet. Everything’s Free!

OK, so almost nothing is free. When we made a “Hire Us for Free” offer at Answer Guy Central, there were strings attached. They were minor, but they were strings nonetheless. When Angry Birds became free, a lot of people got to watch a LOT of advertisements. That’s not really “free”, either.

Now, a fitness-tracking App called Runkeeper is free. But you’ll find that only the most basic features are actually free. Runkeeper is making a big deal about how it’s their “Pro” model that’s become free, implying that it’s the good version of their service (there was always just plain “Runkeeper”, for free). But hey . . . you need Runkeeper Elite if you want the good stuff.

Can you say “Bait and Switch“?

In the case of Angry Birds, I’ve been clear that I’m impressed with their grasp of the idea of business change. The dollar or so that was getting collected when someone downloaded Angry Birds on the iPhone wasn’t a compelling long-term business model and by replacing that small amount of revenue with billions and billions of ad impressions Angry Birds has become a genuine phenomenon. But in taking Runkeeper free (to get more installations . . . great so far . . .), Runkeeper has 1) offered almost nothing in return, and 2) communicated poorly.

In their announcement of Runkeeper becoming free, Runkeeper’s owners have talked about how they want Runkeeper to be all about community, and that it’s from that community that they’ll build a business model. I’m sure they intend to do exactly that; there are any number of ways that services can be grafted onto the sharing and community features of Runkeeper that might carry fees. But even seeing most of your own information at Runkeeper requires paying for Runkeeper Elite. That’s not about community; as I said, it feels like nothing more than a bait-and-switch scheme: 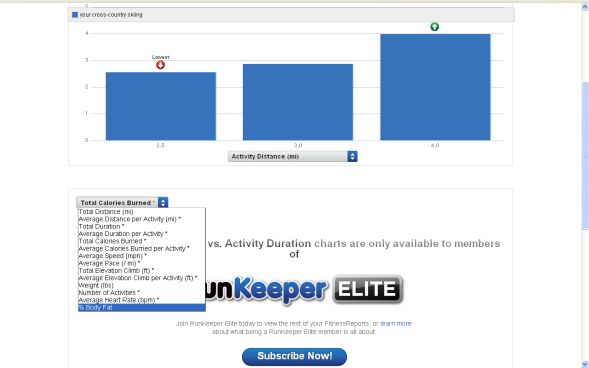 Considering how many fitness Apps there are available that do as much in their free versions as Runkeeper does in its paid version, this just can’t be a good move. And I’m guessing that sometime soon Runkeeper will become a lot more free than it is right now. But if not, Runkeeper could find itself enshrined on The Answer Guy’s Customer Service Wall of Shame.

Oh and by the way: because we really believe in business change at Answer Guy Central we’re repeating the “Hire Us For Free” offer. Go To the Hire Us For Free page, and follow the instructions you find there. This time around, the offer expires at 6 PM EST on Friday, February 4.