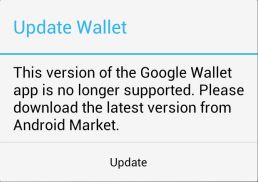 WHAT ARE YOU DOING DISABLING AN APPLICATION INSIDE MY PHONE???

Imagine you’re sitting in a New York City Taxi Cab. NYC Cabs are one of the places where NFC payments can be counted on to work, and as an owner of a Galaxy Nexus SmartPhone, I’ve gotten used to paying for cab rides by just tapping my phone against the little magnetic receiver.

This weekend, I was in a cab, got to my destination (a hospital, by the way, where I was rushing to visit someone who had just suffered a fall), pulled out my Verizon Galaxy Nexus, fired up the Google Wallet app to pay, and saw the image you see above.

OK, so Wallet has updated and has some kind of guaranteed failure device built into it to ensure that you only use the latest version of the security-dependent App. I tap the “update” button, get taken to the Google App store, and am greeted by a message that says the latest version of Google Wallet is incompatible with Verizon Galaxy Nexus phones.

Except it’s a lie. There hasn’t been an update to Google Wallet at all; Verizon Wireless has reached into my phone and disabled an App that I had downloaded.

Can you say “privacy violation”? Or maybe even “trespassing”?

I know Verizon’s position that “this version” was outdated to be a lie because I took a look at the “about screen” for the App both before and after I went out onto the internet and found a version of Google Wallet that would still work in my Verizon Wireless Galaxy Nexus. And both the old and the new version report exactly the same information: 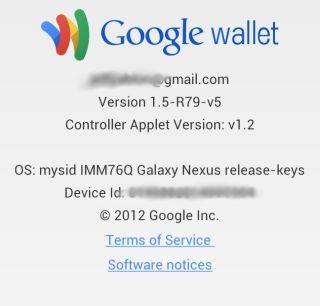 Why is Verizon Wireless trespassing in its users’ phones?

Presumably, Verizon Wireless’ Customer Service faux pas is related to their desire to get customers using their competing ISIS NFC payment system. I mentioned ISIS when I described the issues inherent to using NFC here in the USA in this piece on Google Wallet. Well, ISIS still isn’t here, but if you’ve found peace with the issues in NFC, Google Wallet is not only still around but getting better.

Whether the issue is privacy (“my phone!”), trespassing (“my phone, keep out!”), or customer service (lying to customers, Verizon? Really?), this isn’t OK. Amazon.com figured out that playing around inside devices they’d sold without customer permission was a bad idea, over three years ago. Verizon Wireless, are you listening?

Verizon Wireless is listening, by the way, but their response to a reporter at Engadget just makes their lie regarding the compatibility of Google Wallet with their version of the Galaxy Nexus seem worse:

What’s the positive in this story? If you’re a Verizon Wireless Galaxy Nexus owner and wish to use Google Wallet, you still can; just download it from here. If you’ve set your phone to allow Apps downloaded from external sources, you’ll be back up and running in seconds.

Once again, and with gusto: lying does not equal customer service.