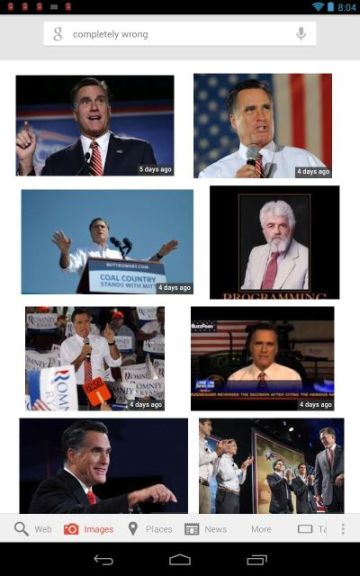 It’s almost time for the Presidential Election here in the USA. I supported Barack Obama four years ago, but this time around I find myself—despite still hoping President Obama gets four more years to do the job—disappointed in the options. Political statement complete. Now, let’s talk Search Engine Optimization.

If you do a Google Image Search for the phrase “completely wrong“, you’ll get what you see above. Note that the only change I made to what popped up on my screen when I searched for ‘completely wrong’ this morning was shrinking the image to take up less bandwidth and screen area; take a look and you can see that I’ve included the entire display from my Nexus 7 in the picture above. This isn’t faked in any way, and I even searched in Chrome’s incognito mode to keep these results as honest as possible.

I can’t specifically tell you why this would be. While it’s possible that some Barack Obama-supporting Search Engine Optimization practitioner gamed the system, having this many different results from different web sites pop up associated with pictures of Mitt Romney as completely wrong would tend to rule out that possibility. What it more likely means is that there are an awful lot of people out there who think Mitt Romney is ‘completely wrong’ and have said so, and Google has jumped on the Mitt Romney is completely wrong bandwagon based on pure volume.

So onto business and Search Engine Optimization.

As I said, I didn’t have anything to do with Google thinking Mitt Romney is completely wrong. On the other hand, I could have; Google thinks Seth Godin found Osama Bin Laden, because I told them he did.

Google also believes I know more about several Rock Stars than anyone else does. And that using the Answer Guy for Search Engine Optimization is a great alternative to Hubspot. Those options, of course, are as they are by design.

The point, as I’ve made here many times, is that Search Engine Optimization isn’t just a fantasy. We know how to get you results, and Mitt Romney being Completely Wrong is an example of why that’s possible.

SEO and Long Tail Marketing: they work even while you, or even Mitt Romney, are sleeping. And that isn’t completely wrong—or wrong at all.