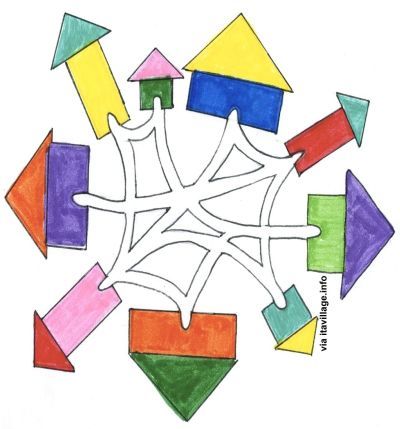 Regular readers know that I lost my sister a few months ago. It was and has been, either surprisingly (you’re both in your 50s!) or unsurprisingly (I lost my sister!) a tremendously impactful and painful thing. Barbara and I were close and in pretty much constant contact, and ‘replacing her’, as if that’s either possible or a good idea, hasn’t been easy.

The idea of “It Takes a Village” has been on my mind for years, and more and more since Barbara died. Whether you credit Hillary Clinton for the phrase because of her book of the same name, Toni Morrison for her earlier reference to children and communities, or subscribe to vague references claiming “It Takes a Village” to be an old African proverb, ‘It Takes a Village’ has always struck home for me. None of us are alone, and all of us need . . . all of us . . . to succeed.

This is probably one reason I write here and speak about so many seemingly-disparate topics; things interact. Very little is ever simple, or “true”.

I can apply that to issues like Virgin America Customer Service (they didn’t owe me anything; they just missed the point). I can use it in talking about the dichotomy for customer service at Apple. We can talk people interaction when we discuss the Internet and family videos, or the way young people look at older folks. We can even make ‘It takes a village’ about Artificial Intelligence and bad attempts to create A.I., like Siri.

People, at the end of the day, need actual contact with other actual people. And we as people need to be aware of the impact of the things we say and do.

About a month ago, Barbara’s husband and I had a back-and-forth that started when he pointed me at this article in New Republic. Marginally a piece on television programming, it’s really a broader commentary on society and the way our choices as village elders effect the village’s children. Economically, sociologically, and otherwise, we’ve created a world that’s incredibly and increasingly difficult for our children to navigate, and it’s leaving them disconnected from us—and one might argue, pretty much everything. Our villages are fracturing.

The line in that piece that struck me hardest was this one:

motivated twentysomethings are wasting a decade’s worth of creative energy, that they would be better off living outside of their own heads for a while

That, and the author’s reference to the book Twentysomething: Why Do Young Adults Seem Stuck?, which the author had wanted named differently. It seems that words like “Brink” and “Cusp” were either too controversial, or not buzz-ish enough.

Neither is OK. When controversy is something to be avoided, and yet Buzz is to be chased, we’ve stopped saying anything. What kind of village is built on a foundation like that?

Our conversation then turned to another global issue; namely, the possibility that we aren’t quite sure where the next industrial revolution is coming from. Village elders may be scared watching wholesale business change take place around them, but our children are both scared and unprepared to handle a business world with such fuzzy parameters. So let’s be real: as with most things, it’s the elders who are responsible for the paths taken by the neophytes. And we haven’t been able to define the paths available to our children very well.

A few of our young people are doing things that might help with this. Kickstarter, for example, makes it possible to raise capital for small projects, almost by magic. Kickstarter makes it so that the boys in Rabbit Troupe can ‘be their own men‘, for example, and although the lack of contractual terms on Kickstarter requires even more undefined business change, it also represents progress that makes sense to village youngsters struggling to find their way.

In this village, it takes tenacity just to get started.

Then again, it always has.

While ‘traditional’ ways of doing things, like begging friends, family, and other village residents to help you out or pursuing bank or venture capital financing are still viable methods of getting started in business life, it’s crowd-sourced options like Kickstarter that are increasingly the funding vehicles of choice for small businesses. But these choices are made by the same young people who most often need and use them, meaning there’s still a disconnect between the availability of the tools and the systematic approaches that users need to employ, either at the start of or after they’ve gotten started.

Hello, village elders? Are you listening?

Project Kickstarter is amazing. The energy being channeled into the projects that get funded on Kickstarter by the kids using it is great. But Kickstarter doesn’t—can’t, really—go far enough. It’s a broadening of the net.

It’s easier—it cuts out a few steps—when you can crowdsource the ideas you once had to beg people your actually knew to help you with. On the other hand, if you want to build a factory to manufacture cars and buy the inventory and hire the staff to actually do it, more traditional financing is almost certainly going to be necessary. And this, having the knowledge to go to that next, more complicated level, is where the real village comes back in.

And that’s the real difference between once upon a time and now: small business used to start simply because the business starters were passionate. Now, because of the same forces that make Kickstarter possible, the viable life spans of many businesses are compressed down to almost nothing, so you can’t start a business and think it’s going to feed and house your grandchildren. Today,  you need to have an exit strategy before you even get started.

Try to explain that to a (‘typical’) twenty-something. You can’t, both because it’s incredibly complex, and because when you helped build your village that idea was the opposite of how people thought.

Our villages look different than they used to look.

Influency* is all about building villages. Get ready; your path to influency is about to open up.