Who’s Armando Kirwin? Is He Old Enough To Have An Opinion?

Today’s business change lesson might sound like a personal attack. Dear Armando Kirwin: It isn’t. You, sir, just showed up in the wrong place at the right time. Like David Aldridge before you, you’re a guy making a living, and operating a bit outside your sphere. Apologies ahead of time, young sir . . . 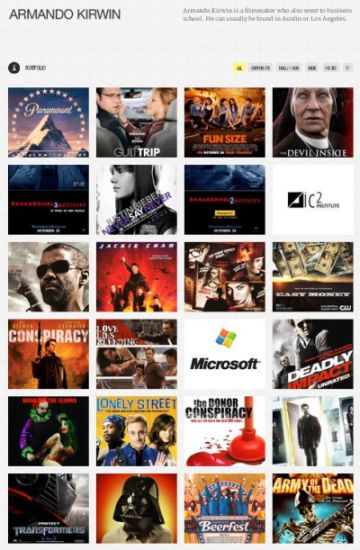 Armando Kirwin is a film producer. He is, as I write this, approximately 31 years old, a fact I extrapolated from this article about him, written five years ago. While I’ve been known to say “people shouldn’t be allowed to marry or procreate until they’re 35”, tongue planted in cheek, I make no specific point about being exactly 31 years old. Armando Kirwin, producer of Hollywood films, might be a smart guy. Mr. Kirwin could even be “smart beyond his years”.

What Armando Kirwin most certainly is not is the lead producer of some of the films that his website shows him as having worked on. He’s just too young to have had a meaningful role producing big-budget films in 2007.

That’s OK. Perception is reality, there are often dozens of “producers” on a film, and Armando Kirwin has put together a truly beautiful web site highlighting his impressive résumé.

Nevertheless, Armando Kirwin has presented a too-obvious example of why younger people just aren’t as smart (at certain things) as older people.

A few days ago, Kirwin guest-blogged at TechCrunch, opining that Netflix “is bluffing and it will be their downfall”. He made an argument that had its good points; as I said, Armando Kirwin is a smart enough young man. But he missed the point that matters, and in doing so rendered his entire argument unmeaningful.

Go read the piece at TechCrunch. One thing Kirwin got right is that as prices for media continue to escalate (and that will eventually change; as there are more producers of more garbage the cost of production is dropping everywhere except in the Cameron-esque arena),  eventually so will the cost of buying rights. It will become difficult for a small company to compete with larger ones. And Netflix just isn’t that big.

But here’s the thing: Netflix being bought by Microsoft, as Armando Kirwin believes, wouldn’t be a “downfall”, it would be an example of what grown-up businesspeople call “acceptable exit strategy”. That’s an advanced topic, and a young film producer who’s never really been responsible for all aspects of a business isn’t going to understand that—no matter how “smart” he is.

I’ve been critical of Netflix before. Armando, I’m not here to defend them, and as I said in the lead-in to this piece I’m certainly not here to attack you personally. And things change; renegotiation can happen, any time. But it’s the rare creative who can also do business, and certainly not at 31.

It takes a steady hand as well as vision to create real business change. As much as I hated praising Apple for their part in Google’s expanding reach, sometimes you can only make business change happen when you have a very deep plan.

And that takes a lot of experience. Ultimately, it’s what you must have, or hire, when you’re ready to step up and make Influency* .