Influency cometh. Or if you aren’t careful, Influency goeth away. Last week, I happened to look at our search engine optimization ranking for the name “Jeff Yablon”. And while there’s been a slight uptick over the weekend, Google now sees Answer Guy Central as only the fifth most important search result for my name.

Social Media is coming to get you.

I know that sounds like old news. And I continue to have a love/hate (mostly hate) relationship with Facebook, et. al. Social media, in business, is, pure and simple, a necessary evil. But the emphasis is on “necessary”; if you want to get found and keep your Influency on the rise, you must participate in Social Media.Here’s the proof:

While “Jeff Yablon” seems like an uncommon name, it turns out there are quite a few of us out there. And while I don’t absolutely need to be the #1 Google-ranked “jeff yablon”, I do need to be right up at the top of search rankings for my name, or … well, you won’t find me. How would that look when I preach Influency the way I do? 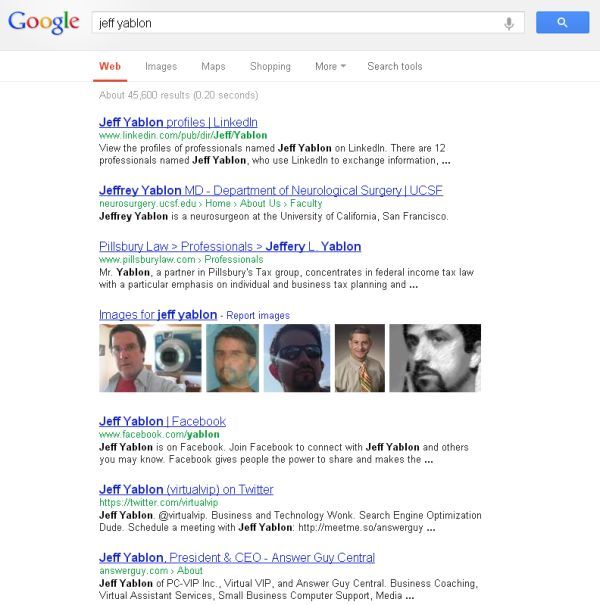 The good news is that in these results I’m one of the people you’ll find in that #1 ranking, where all the Jeff Yablons on LinkedIn are grouped together. And when Google took a break from search rankings to interject pictures for “jeff yablon”, it saw me as second, third, and fifth most important. I’m also relieved that it’s my Facebook profile showing up at #4, and my main Twitter account at #5. But the page I want the world and our search engine optimization and influency overlords to see as #1 for “jeff yablon” has dropped all the way down to #6. Uh-oh.

Now it should be obvious that I can still outrank everyone, including all the social networks, because the doctor at #2 and the lawyer at #3 are doing pretty well in that regard. But it might take a bit of effort. And that’s today’s story. SEO takes continued attention, Influency isn’t magic, and it’s all about luck in only a small proportion. Influency takes work.

And Influency takes many forms. Video, difficult as it is to do well, does well at Influency. Simple things like H1 Tags boost influency, too. I’ve shown you how large an impact images have in the influency arena.

Want to talk Influency with The Answer Guy?