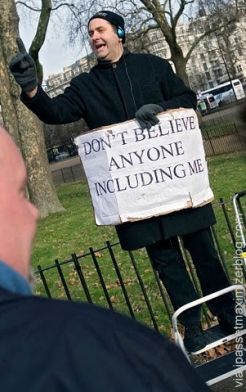 I love the coincidences that happen in the pursuit of Influency. Like coming across the picture you see here at a blog about Intellectual Property, just a few days after telling you how we handle image copyrights.

Or that Seth Godin, a marketing legend who feels as though he’s pretty much dropped out of sight lately, could cross my radar so soon after a piece I recently wrote about him. And Seth’s point, for a second time in a week, boils down to this:

Sometimes, even in marketing, it’s OK to be a contrarian.

That flies in the face of conventional wisdom on the topic. “Never is heard a discouraging word” is a much more typical marketing strategy, but sometimes you can do better by just … telling the truth. Sometimes, your message can be amplified by speaking your mind. Sometimes, you just need to be the gadfly.

Sometimes, you need to point out what’s wrong, to get to what’s right. Of course, it helps if you have an actual point, and have done your research (are you listening, John Dvorak?).

So now, Seth Godin, a guy who I’ve noticed parroting me before , seems to be adopting the contrarian position. Seth says “say it backward”. I say “tell it like it is”.

They aren’t always that different. It’s time marketers start paying attention to that.

One of the ways we’ve demonstrated this recently is through a video series focused on the wrong way to build a web site. You Can’t Build a Web Site in One Hour is lying; of course you can build a web site in an hour, and the video we keep talking about in our series proves it.

It just won’t (ultimately) be a web site worth building.

But it isn’t all you need; it just isn’t. And if you try to build it in an hour you’ll find that later when you realize you need to build a ‘real’ web site you’re going to need to start by either unraveling what you already have or throwing it away. And neither is OK. Either will decimate your Influency.

Marketing is simple: all you have to control is everything. And as Seth Godin says, a new, surprisingly viable way of making that happen is to work backward. Start with the goal and deconstruct.

In other words, be Influency.