Broken Influency and The Nintendo DS 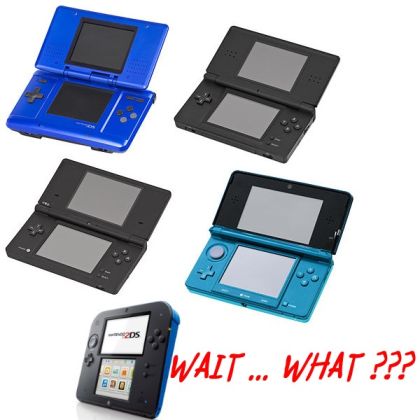 If there’s ever been an area where Influency matters, it’s video games. Once you have someone locked into your ecosystem they tend to stay unless something absolutely remarkable happens. Microsoft learned this when they announced the upcoming Xbox One version of their immensely popular video game console, and over the course of several weeks begrudgingly retreated from plans to make using the system too restrictive for the liking of their user base.

The Nintendo DS is the best-selling gaming platform of all time. Nintendo has tweaked DS for size and abilities a few times since its introduction in 2004, but Nintendo DS has always been a two-screen, foldable gaming system that you could slip into a pocket. And yesterday, Nintendo blew up their gaming business. Over. Buh-bye, Nintendo.

The upcoming version of Nintendo’s gaming system, called the Nintendo 2DS, differs from its predecessor the 3DS (?!!?) by virtue of costing a few dollars less, eliminating the 3D display feature that is probably little more than a gimmick to most people, and—oh, that’s right—eliminating the hinge.

The 2DS, simply, will not fit in most pockets. So why would anyone buy this thing?

Nintendo’s point in producing the 2DS is to staunch the flow of young people who are abandoning the DS line in favor of tablets. And as an idea, this makes sense. I own a second-generation Nintendo DS that I played with—mostly on long plane flights—right up until I started using a Nexus 7 tablet for both work and entertainment. But absent the pocketability factor the Nintendo 2DS simply makes no sense at all. Even two of my video-game addicted kids laughed—they actually laughed—at the idea that anyone would want a Nintendo 2DS.

Video games are a huge business, and I’ve used them to talk about both business change and Influency, here. A video game as a serious collage course? Real. Video games from companies that know more about media than a botched-release-that-could-have-been-huge belies? You bet. Video games as a measure of Internet speed (and how that does—and doesn’t—matter? You read it here first.

Hello, Ninetendo? Does anyone over there actually use your products, or have children who do? I mean, I know nobody over there is Steve Jobs, but, seriously?