Sometimes, Influency Is About Knowing When To Give Up 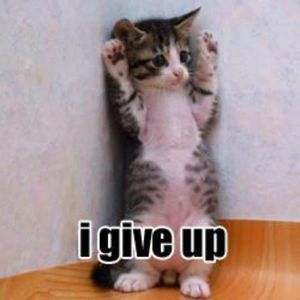 Do you know when to give up?

The other is that you give up as soon as the task you’re trying to achieve shows itself to be undoable, or impractical compared to the end goal, or not worth the effort relative to the reward.

In sales, the latter is often referred to with the phrase if you’re going to lose, it’s better to lose quick. And really, that’s as good a way to describe the conundrums of work versus return and risk versus reward as you’ll ever come across. Influency, in whatever form you’re striving for—and this is besides the marketing connotation—isn’t so much about ‘hanging in there’ as it’s about finding the right there to be at and then being there, and being there, and being there. It’s the main idea behind long-tail marketing.

Just a reworking of that old saw “work smarter, not harder”? Maybe. But the idea of knowing when to give up goes way further than that.

I make no secret about my preference for Android phones and tablets over iPhones and iPads. When the iPad first came out I referred to it as just a giant binky, and I’ve made a tools vs toys analogy comparing Android to iOS. I’ll stand by the points in those articles; Android is simply more useful. But as Jeff Goldblum’s character in Jurassic Park stated, just because you can, doesn’t mean you should.

A technology called Near Field Communications—NFC—has been baked into mobile phones for a couple of years. NFC has been available using an e-payment application from Google, and while the combination has had issues, it’s worked well enough on AT&T and T-Mobile and you could coax Google Wallet into working on Verizon if you tried hard enough. But Verizon, always seeking ways to expand their Influency, has repeatedly broken Google Wallet, leaving us all waiting for something called ISIS to make its appearance. And ISIS is here now, and all three carriers are in on the fun.

Yesterday, I dropped into my local Verizon Wireless store to pick up the new SIM card necessary to use ISIS. And that should be all you need to know about ISIS and enough to make you run the other way; ISIS doesn’t work until you allow your carrier to add new circuitry to your phone (remember, your carrier didn’t design or manufacture that phone). But as a long-time Verizon customer tired of playing cat-and-mouse with them and still liking the idea of NFC, I bit; my phone is now ISIS-ready.

All I had to do to use ISIS was download an App and activate the ISIS service through a third party, who, when the activation failed repeatedly, referred me back to Verizon Wireless for technical support.

And Verizon had no idea what to do to get ISIS up and running.

In fairness, I eventually found someone at Verizon Wireless who did know how to get ISIS working; this won’t be devolving into a story about poor customer service at Verizon Wireless. But it took too long, was too hard and the real point is that ISIS would never have been necessary except for Verizon’s refusal to allow Google Wallet to work in  my phone. And I probably should have given up on ISIS long before the customer service representative who took the time to listen to me found the end-run necessary to get ISIS working.

Verizon and ISIS, of course, now ‘have me’, except for the reality that NFC is still not ubiquitous enough to be terribly real in this country. So have they boosted their Influency? Only in a literal sense; ISIS is still too hard to use and is set up very much the way Google Wallet was two years ago before Google figured out that they had made Wallet too difficult to be practical. In fact, ISIS is even worse than Google Wallet circa 2011; not only are there too few payment options, but signing up for ISIS forces you to also sign up for an American Express-issued virtual card … that isn’t even virtual. Courtesy of ISIS, in a few days I’ll be receiving a piece of plastic from AMEX that I neither need nor want.

What do I want? At this point I really just want my old Verizon SIM back, and for ISIS to have never emerged from its three-year hatching process.

The reason I tell this story has everything to do with Influency, and what Influency really is. Influency is about reaching a point where you become impossible to ignore, and if ISIS ever becomes simple and flexible enough that Verizon customers with no technical knowledge and less patience than I can use it the fact that it might just ‘be there’ could be an Influency play worth making. But stopping people from using a competing service for two years only to roll one out that’s as bad as ISIS? It’s enough to get the few people who care enough to bother to figure out how to get Google Wallet working. Or to leave Verizon altogether.

Sometimes, you just need to know when to give up.

Of course, giving up on your Influency plans isn’t an option when you’re looking up at the Verizons of the business world and wondering how you can get just a fraction of the attention they manage. So what can you do?

You know the answer.