Employees, Contractors, or Other: All Create Influency 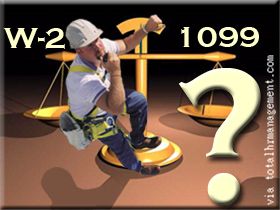 Yesterday in Everybody Being A Handyman, I wrote about the impact well-executed SmartPhone software can have on our lives, and more broadly on employment markets. The change in employment structure that’s happened and is escalating through the Internet economy takes a lot of forms that are less technology-related, though, and today I’ll be talking about what the piece yesterday’s article was based on originally made me think about.

It’s Time to Fire Your Employees.

I hate that I’m saying that. HATE IT. And there are situations under which shifting from employee to contract labor doesn’t make sense and may even be illegal. But Influency is effected by a tremendous number of things and taking charge of your Influency is a systematic business process that makes this an important conversation.

First, the impractical: if you’re running a factory or other manufacturing operation that’s dependent on people with specific skills showing up every day and working as a unit to get something done, contractors won’t work for you; you need the kind of regularity that only employees who do not only the same thing but the same thing for you every day can bring about. Now, the legal (disclaimer; I’m not an attorney): merely claiming a worker is a contractor doesn’t make it so. Ask Microsoft. Contractor status can be disavowed under many circumstances, and there will be times when either your contractors, the government, or both will wish for a contractor’s footing to become that of an employee.

But if you’re in a position to work with contractors instead of employees, there are many compelling reasons to make that status switch, the largest of which are that you shift the employer’s portion of certain payroll taxes to the contractor, and your liability in the event your business changes and you no longer need the labor being delivered is greatly reduced.

The downside to contract labor? Yes, employees tend to cost less overall; contractors generally get a higher hourly wage—albeit without the aforementioned tax overhead or the cost of supplying benefits and administering the benefits programs (cue discussion of ObamaCare). Oh, and this: employees are ‘there when you need them’; if you pay someone to be in your office or otherwise available to you from 8 AM to 5 PM, you know they’re around when a crisis strikes; contract labor is trickier than that.

All of that said, there’s one fact that swings the contractor vs employee equation decidedly toward contractors: contractors are becoming less expensive.

I’m not advocating farming labor to places thirteen time zones away in countries where your language isn’t native—or even close. But when you find people who work on schedules that accommodate yours, speak your language fluently and understand a bit of your idiom, a thirty percent cost reduction starts looking pretty sweet. And seventy percent is even harder to ignore.

Because our primary business has become Integrated Content Marketing, I don’t write about these issues nearly as often as I did when we promoted ourselves as the general business consultants we still act as for many clients. But as I wrote the We’re All Handymen piece, it occurred to me that I needed to address where that statement about the labor force intersects Influency.

Contractors are hungry. Employees tend to get complacent, even though they also tend to be reliant to you for their entire livelihoods.

Whether we’re talking about employees, contractors, clients or customers (you do know the difference, right?), or anyone else, one element of Influency that makes it influence-y is the place of importance you hold.

That’s where we come in.  When you decide to start using more contract labor, we find, engage, and get between you and them so you don’t have to manage those contractors. It’s like having one employee to direct the work of dozens, often for less than you’d pay one W-2 status person.

Food for thought. If you also see it as food for action, you can contact me here.

Now get back to putting out those fires, Mr. Handyman …