Screw You, Major League Baseball (and MLBAM Too) 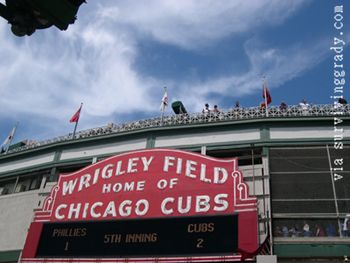 In the latest and greatest-in-recent-memory example of a large media business trying to keep the media business running in the way it once did, this week Major League Baseball Advanced Media got a bunch of podcasts removed from Apple’s iTunes store by invoking trademark rights.

I could stop writing and just point you at Keith Olbermann’s piece from the other night, except … The Crankiest Sports Reporter in the World wasn’t nearly clear enough about the business change ramifications.

I’m pretty sure that if anyone at MLBAM notices this story I can expect a letter from an attorney. I’ve plastered MLBAM all through it and included enough SEO targeting to ensure getting noticed by Google. For good measure I’ve included both a picture of Wrigley Field, where MLB’s Chicago Cubs franchise plays baseball, and a screen shot from my computer after searching for images using the phrase ‘screw you major league baseball’.

Ready? Listen to this:

In this thing we call ‘life’ there are people who write, speak, and do video about things they love. And sometimes people make money expressing their opinions, reporting news, or being satirical. And while the Internet has ratcheted that up and made it easier to create and distribute, it’s not new. But MLBAM seems to have decided that unless you have their permission to talk about the teams that operate under MLBAM’s and Major League Baseball’s umbrella you’re violating their trademarks.

I first explored the idea of the phrase “unauthorized use of the pictures, descriptions and accounts of this game without the express written consent of . . .” here almost five years ago. I remember the first time I heard those words, as a young boy, listening to a New York Mets radio broadcast, and wondering even then if Major League Baseball or The Mets had the right to tell me that I couldn’t describe a baseball game without their permission.

That of course isn’t actually what those words mean. When you hear “unauthorized use of the pictures, descriptions and accounts of this game without the express written consent of . . . is prohibited” what you’re being told is that you can’t REBROADCAST what you’re hearing or seeing. There’s nothing stopping you from setting up your own media outlet specializing in coverage of The Mets, Yankees, Cubs, or any other professional sports team or league, trying to get attention, and yes, profiting from that. That’s what the media business is.

Problem is, sports teams like those covered by MLBAM are now in the media business, whereas they once believed they were in the business of playing sports.

There was a time that businesses protecting trademarks did so by sending the aforementioned attorney’s letter. But MLBAM, rather than contacting the podcasters who spend their time passionately discussing their favorite sports teams, decided a faster way to handle them would be to cut off their distribution; MLBAM approached Apple demanding that the podcasts be removed from the iTunes store because they were violating MLBAM trademarks. Apple did what most companies faced with media take-down requests would do; they cut off the podcasts, and began investigating the issue only after people with big megaphones like Keith Olbermann opened their mouths. And it appears that the Mets, Yankees, Twins, and other podcasts attacked by MLBAM will be returning to iTunes.

I’ve picked on the way the NFL defends its trademarks on the phrase “Super Bowl” a couple of time (here and here). I acknowledge the NFL’s trademarks on that phrase, and I acknowledge MLB and MLBAM’s absolute need to defend their trademarks. And yes, at some level the idea that the guy who makes Mets Musings is “benefiting from the New York Mets Trademark” is correct. But then, so is every other media outlet. Unless MLBAM is trying to point out that blogs or vlogs or podcasts aren’t journalists that’s not really the problem. And it’s also not possible. Know why? Keith Olbermann blogged for MLBAM from 2009 until 2013. I’m pretty sure MLBAM would have had a problem with the notoriously hard-to-work-with Mr. Olbermann unless they assured him they were doing “real journalism”.

So this is a story about being aggressive in your business practices (good), taking the path of least resistance (good), and … knowing it isn’t going to work because the business world and media business have changed and everyone will see what you’ve done and call you on it if you do something disingenuous (very, very stupid).

The world and the business of media are changing. Who are you, and who owns your copyrights and trademarks? I OWN THEM. Don’t like that? You know where to find me.