Optimize This: ‘What Time Is The Super Bowl?’

The turns-out-to-be-not-so-crazy guy on the left sprained his ankle, but ‘Mr. Aww Shucks’ sprained his ego. Somehow, the question  What Time Is The Super Bowl? turned out to be more interesting than the game.

At the Super Bowl party I attended, I was literally the only person rooting the for the Seattle Seahawks in last night’s Superbowl. This made me less than popular, but also made a quick exit to get back to the business of Influency easy. I’ve had superbowl influency on my mind. And no, our spell-checker hasn’t broken down.

Unlike my rant a year ago about the way the National Football League manages the ‘Super Bowl’ trademark, today’s article is about something you can control, although it’s getting a lot harder to do so. Search Engine Optimization, a service we no longer provide on a stand-alone basis, is still a viable and important part of the Influency equation, but Google’s making it important that you think different about SEO.

Just before the big game, I came across this piece at Mashable about the question “What Time Is The Super Bowl?”, and it’s interesting for reasons that go beyond the Mashable post being nothing more than an unabashed copy of a full article from The Atlantic. It speaks to how easy search engine optimization once was, how SEO became more difficult over time, and the change in tactics that became necessary for effective optimization as Google got smarter about engineering what works for people trying to game their system. For example, the repeated use of a word or phrase you wanted to rank for was more effective a few years ago than it is now. And while Google’s always seen “Super Bowl” and “super bowl” (and “Super bowl” and “super Bowl” …) as identical, there was a time when “super bowl” and “superbowl” registered with Google as different things.

Has Google decided that the space character doesn’t matter? No. Google’s gotten smarter, and the fact that people sometimes spell the name for the NFL’s big event as “superbowl” even though that’s technically incorrect is one of about a gazillion little factoids that are now built into the Google search algorithm.

And even that isn’t the point. 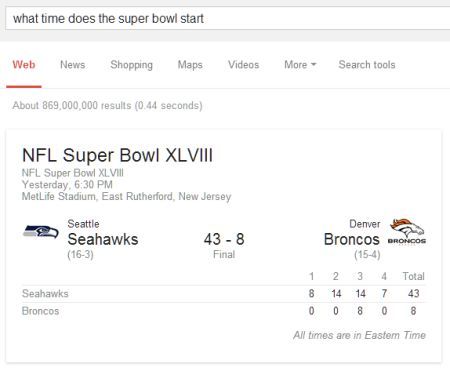 “What Time Does The Super Bowl Start?” 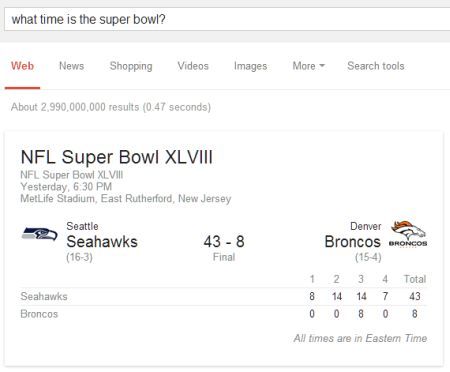 “What Time Is The Super Bowl?”

This morning, I searched Google for both “what time is the super bowl” and “what time does the super bowl start”. And while the otherwise-huge pool of 869 million possible matches for what time does the super bowl start” is dwarfed by the very nearly 3 billion search matches for what time is the super bowl, the only thing that matters is that when you ask Google either question, they give you the answer directly, with a bunch of context, And You Never Even Need To Go Beyond Google’s Own Answer To The Question. This is a boon for users; the right information is there when you ask for it. But it also points out a bit of a problem:

Google’s not in the search business any more; they’re in the content marketing business.

Of course, Google uses search to drive traffic to the content they produce, or sell, or give away, or whatever you perceive them as doing for you when you aren’t sure of the Super Bowl’s starting time. But that’s the reason SEO is no longer viable as a standalone process; Search Engine Optimization still matters, but having content behind your search modeling efforts is where the real action is.

Business, Super Bowl style, has come a long way since this story about The Super Bowl, Kim Kardashian, Brittney Spears, and Paris Hilton. All you need to do is get a handle on how those changes and your business match up, and you’re golden.

And the simplest path to understanding your Influency strategy? Just Click Here.