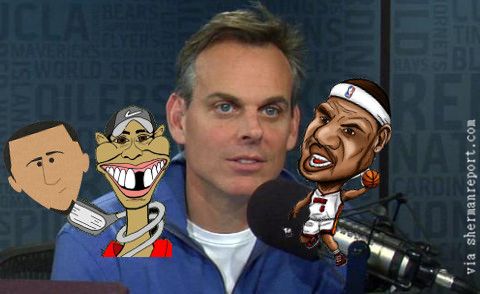 In a fun-filled round of which one of these is different?, you’d probably realize right away that Colin Cowherd is different from Mssrs. James, Woods, and Kaepernick.

All three of the other guys are big-time professional athletes, while Colin Cowherd is merely a sports commentator on ESPN Radio.

So Colin Kaepernick is a bit too into flashing his wealth (now, great wealth) around, Tiger Woods lost luster on his hero-to-all model when his ex-wife beat him up for cheating on her, and LeBron James chased off a few folks who would otherwise have been fans when he mismanaged “the decision”. Colin Cowherd? All he does is mouth off for a living.

I was listening to Colin Cowherd in the car yesterday. As I explained when I mentioned that Rick Pitino is an Idiot, the car is the only place I still listen to radio, and I’ve come to really like listening to Colin Cowherd. Sure, he’s only talking about sports, and borders on playing his role like a sports shock jock, but Colin Cowherd is a really smart guy, and I’ve recently noticed that every time I listen to him I find myself admiring both Mr. Cowherd’s radio broadcasting chops and a lot of his honest and blunt positions.

Colin Cowherd, in short, is a way more successful version of what I was when I was The Computer Answer Guy on radio. I dig his gig.

Yesterday, Colin Cowherd spent a large chunk of his radio program talking about this story. It turns out that LeBron James, the best basketball player in the world for the last few years, is also the least-liked basketball player, but only among white men. I bring Colin Kaepernick and Tiger Woods into the conversation—and Colin Cowherd only included Tiger Woods; the Colin Kaepernick connection was coincidental based on his signing a $126 million contract the previous day—because there are a number of points that make the white guy thing stand out.

I was horrified. Stories about people like Donald Sterling hit me at a gut level, but are also easy to dismiss as merely the rantings and ramblings of an old, racist coot. The idea that an easily-measurable and shouldn’t-feel-like-this-otherwise identifiable cross-section of the American population is still racist in this manner in the year 2014 is nearly beyond my comprehension.

And what of it?

Media Business Change may change the way we do business, but it doesn’t change people—at least, not quickly. And while I can believe that many people object to Colin Kaepernick’s big payday based on him being brash, flashy, and overtly self-promotional, and while, as Colin Cowherd pointed out, Tiger Woods A) excelled in a sport that is mostly played by white people and B) acted poorly toward his wife, Lebron James is … an upstanding citizen whose only crime against humanity has been the tone of the press conference he held when he left his hometown Cleveland Cavaliers to play for a team in another city where he could win championships. FOUR YEARS AGO.

Colin Kaepernick is immature. Tiger Woods is playing in a white man’s world. James is neither flashy à la Michael Jordon nor does he have that amazing smile that Magic Johnson wore all the time. In other words, Lebron James is simply—quietly—the best there is at what he does that ever lived. As Colin Cowherd pointed out, white men don’t like that. It’s one thing to be talented, but being uppity while neither seeming to try nor calling attention to yourself is incredibly threatening.

As I said, this horrified me. It really does appear that white men hate LeBron James because he’s a new kind of threat; there’s nothing to make fun of, or wink-wink/nudge-nudge over.

Whither media, and Influency?

Follow this to its natural conclusion: to be influential, you of course need to be great at whatever you’re great at. But it turns out that to be really Influential you need to also be self-promotional; failing to wear your greatness on your sleeve makes you scary. It will make you LeBron James. And until we live in a world where being different is either acceptable or unremarkable, that means you’ll be a threat.