Moving at Web Speed (Your Trademarks Are Useless, So …) 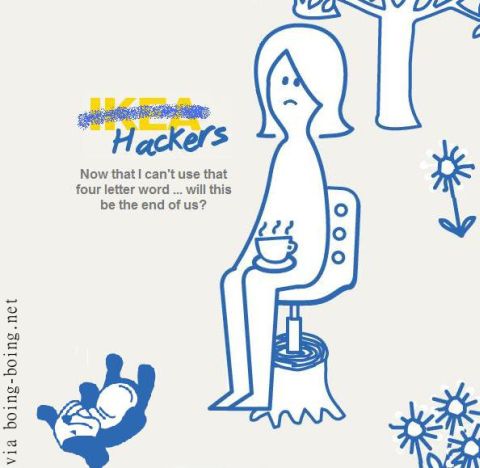 It’s a pretty good bet that you own something from—or at least something reminiscent of—IKEA. Perhaps the world’s foremost expert at producing and distributing inexpensive furniture and home goods and teaching people how to outfit small spaces to feel like much nicer digs than they’d otherwise be, IKEA sells gazillions of dollars of their remarkably … acceptable … stuff. And they aren’t the worst place to grab a quick snack.

IKEA is, however, looking like a bad citizen of the Internet this week, after sending a cease-and-desist letter to one of their fans, whose crime had been to “profit off IKEA’s trademarks”. That fan, who it doesn’t seem was turning much of a profit, if at all, obeyed the Swedish giant’s edict and now ikeahackers.net is in limbo. Note that the link there may or may not work for you. Note also that the owner of ikeahackers.net makes it clear that he’s a fan and not in any way associated with IKEA by saying:

IKEA does not pay me nor is this site their idea or in any way sanctioned or endorsed by IKEA. This is purely a fan-run website

Note especially that IKEA has shown a love for social media in the past; this move is absolutely mind-boggling.

Lots of things go into this story. All of them are about business change, some are about social media, and the real point is that in a world where business growth is largely dependent on your adroitness dealing with people who’d like to be your evangelists, wielding trademarks, patents, and copyrights like the axes they’re too often used as is a big, big mistake.

In true thinking-like-the-NFL style, IKEA has decided that in order to defend its trademark, it should tell a fan using IKEA art to … stop. Stop using its logo, its name, pictures of IKEA products, etc. And yes, IKEA has both the right and obligation to protect its assets.

Problem is, aside from the fact that by playing along as it has for several years it may have invalidated those trademarks, the idea of trademark defense includes the likelihood that someone coming across your mark’s use by someone else might believe it to be you.

Please note, I’m not an attorney and I used that simplistic wording quite because of its simplisticness). I do, however, consult on intellectual property. And while I believe in the idea, the environment that exists on the Internet simply changes what matters, and for that matter what you can do—and especially, what you should.

This act of bullying someone who was actually helping their business is of course unlikely to have meaningful negative impact on their bottom like, but that’s only because IKEA is huge; it’s achieved full-on Influency. But what do you think would happen if you opted for antagonistic behavior instead of finding a way to work with someone who was helping you out?