The Problem and Benefit of Facebook’s Secret Data Study 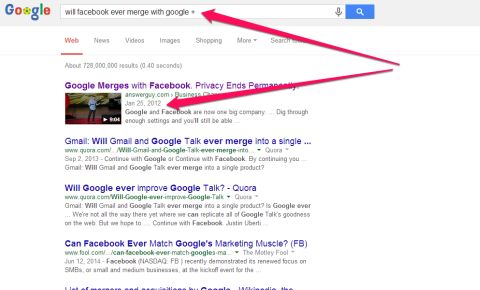 A couple of years ago, I suggested that Google+ was merging with Facebook. My tongue-in-cheek point was metaphorical vis a vis a merger that won’t ever happen, but also steeped in reality. Privacy is over. Period.

I’ve written about the evolution and ludicrousness of privacy as a construct enough times that when news broke recently over a study completed last year where Facebook had intentionally conducted experiments with your Newsfeed to see if they could manipulate your emotions (spoiler alert: yes, they could) I was planning to ignore the issue because it seems as though that’s become a “DUH!” issue.

But then I started poking around our long-tail marketing results this morning and noticed what you see above. Search Google for the phrase will facebook ever merge with google+ and as of this writing the very first place Google will point you is Answer Guy Central. Which makes me proud—we’re pretty darned good at search engine optimization—but also raises questions.

To begin with, now that Google has tweaked their algorithms such that SEO is merely one part of Content Marketing, how is it possible that such a broad question could attribute rank #1 of over 700 million possibilities to a short, two-year-old article that’s only been viewed about 600 times, total? I mean, we’re good at this stuff, but it doesn’t really make any sense that this result could be possible unless something else was involved, right?

Right. And I’m going to try and explain what that something is: Everything matters. 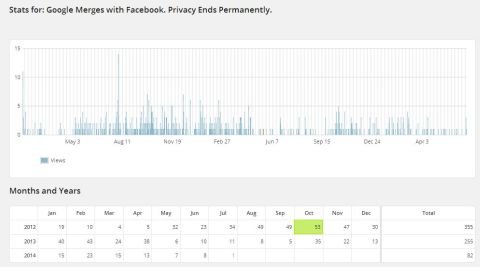 It was also a couple of years ago that I told you about the power of having and optimizing pictures in your content. And it seems that 2012 was my year for prescience, because it was also then that I gave you a heads-up about pictures and search results. Well, surprise! While my picture still shows up on my own Google-fied pages, and while the statistics behind my authorship of content still live somewhere deep inside the Googleplex, articles I write no longer have my picture on them in search results because Google’s decided that the extra bandwidth required to display author pictures isn’t justified by the value of those pictures.

The value to Google, that is.

There was a tremendous value to people who jumped through Google’s hoops to make our pictures show up in search results; the pictures broke up text in a way that drew users’ eyes, and encouraged them to click through. I’ll accept that it might have had a small impact in Google’s world view, but to most of the rest of us it mattered plenty. And Google’s still got the information that matters to them; they don’t show my picture next to search results any more, but Google still knows exactly what and how much I write and can use that information to their benefit. Addendum August 28 2014: as of today, Google has also removed named attribution in search results; presumably this is a “Google also wasn’t gaining anything from showing unpaid bylines” issue. Choke Point Removed.

Take another look at the picture on top of this piece. Do you see that there’s a picture next to our #1 search result on will facebook ever merge with google+? It isn’t my author photo, and it isn’t the same thing you see in the article it points to. It’s a frame from a video embedded in that article. And it’s not even a Google/YouTube video; the video is passing through to Google’s search results from Answer Guy Central and being extracted from a video originating at TED.COM.

And speaking of addenda: As of December 29 2014, we’re still #1 for the search term will facebook ever merge with google+ … but now there’s no picture at all.

I suspect that takes more bandwidth than displaying an authorship/Google+ photo. In fact, I’m certain of it. And I’m almost mystified that Google is allowing videos that originate in places other than on YouTube to creep into their ever-more-closely-guarded search stream. But on the other hand, video works, pictures work and everything matters. What you’re looking at is Google’s present slant toward video regardless of where it originates—and perhaps a preference for established video producers.

Bringing me back to yet another chestnut from 2012: you need to start producing video. Oh, and hey: you want to sign up at Video Network One.

Don’t believe that you have a right to be forgotten. Don’t worry about the stupidity of the United States Supreme Court outlawing Aereo. Google’s got your back.

Or at least Google has its own back, and we’re here to help you climb aboard, and stay there.