Once More: Is Search Engine Optimization Bad, or Obsolete? 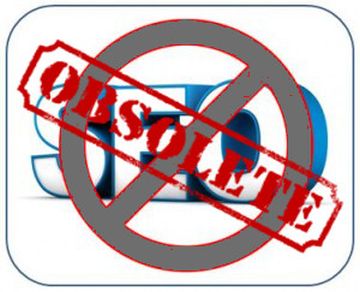 The other day, someone I’ve known since we were about ten years old and who’s a successful banking executive asked me this question:

Anyone who knows me—and I include my readers and listeners in that illustrious group— knows that given the chance I’ll talk about Search Engine Optimization and the things that go into it for hours. But this question from this person, was so simple, short and direct that I felt challenged to try and explain SEO quickly.

SEO can be something of a controversial topic. Once upon a time (call that “15 years ago”), SEO was a simple matter: you plugged multiple iterations of words for which you wanted high search engine ranking into the keyword descriptors on web pages. Google (we’ll just talk Google) was not yet sophisticated enough to realize that pages set up that way were gaming the system and so between that and the fact that SEO was a young field with few competitors you succeeded.

Google caught up to that technique, so SEOs moved on to writing copy in web pages that essentially did the same thing. For example, several years ago I wrote an article about a patent Facebook had received and I seeded the patent’s # 7669123 all throughout the story. Try searching Google for “7669123”, “patent 7669123”, or “US Patent 7669123” and you’ll find Facebook’s Patent 7669123 ? Not Unique. How Was It Issued? in either position 3 or 4 here in the United States, and as high as #1 elsewhere. Obscure? Sure. But read on.

So SEO refers to the practice of getting Google to think you matter. Now here’s the rub:

Google has become sophisticated, and the Internet has become huge. Because that’s true, old-school methodologies for successful SEO are no longer nearly as effective as they once were and can even backfire. So SEO is now a (small?) component of Content Marketing, a nebulous term if ever there was one. Or not: Content Marketing is about <ahem> creating content that’s worth reading/listening to/watching, BOTH so that you create natural buzz and so Google likes you for doing so.

Here’s the thing: there is ABSOLUTELY NOTHING more important than Google liking you. TV and Radio (radio? there’s still radio?) ads work, but only in a very narrow context. Print ads also work in a very specific—and very different—way. The Yellow Pages don’t exist meaningfully any more.

And as if that wasn’t enough, consider that search engines are now becoming local, just as the Yellow Pages once were. So whereas the example about 7669123 is accurate and probably will continue to be accurate in most ways and in most places for a long time, anything that lends itself to local search (a search for “McDonald’s” often means “find me the closest one”) is extraordinarily difficult to rank for in any context other than local—and becoming harder every day.

So the real answer today is that SEO needs to be part of your business processes, with emphasis on both “part”, and “process”. It’s magic in its way, but Search Engine Optimization isn’t nearly as magical as it once was and needs to be just an element of your content marketing strategy. And you can’t do successful Content Marketing without putting a process in place.

What’s SEO? Everything. And who should you call? Duh: The Answer Guy.