Thank you, Donald Trump. By amassing enough delegates to this summer’s Republican Convention to cause your only real competitor to drop out, you’ve changed American politics forever. For the better. 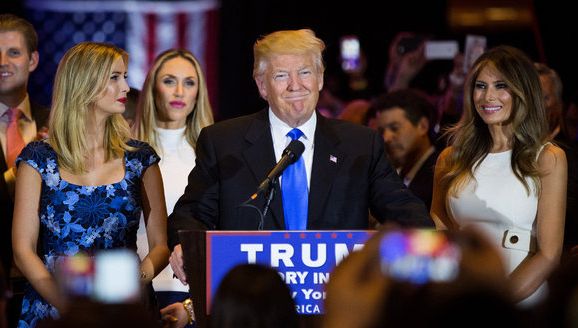 Unless you subscribe to the theory that business is politics, Answer Guy Central isn’t a place where we discuss politics terribly often. I’ll throw out a few factoids here:

I also believe that in our fiercely two-party political system the president’s primary job is to “fit the suit”. Donald Trump does not; he opens his mouth and I cringe. Donald Trump does not seem presidential, and I’m not going to go down the rabbit hole of whether he’s been successful at business or not, nor whether that’s a good predictor of potential success as President of The United States.

But I’ve said for several decades that what runs this country is an ongoing three-way battle between business, labor, and government. Thank you, Donald Trump; you’ve all but assured that our two-party political system will be replaced by one that includes three or more parties.

It should be obvious that I’m not a fan of the idea of Donald Trump becoming president. Seriously, there’s no liking Donald Trump. But as the New York Times said this morning, the Republican Party now belongs to Donald Trump.

They weren’t paying him a compliment. The Times was saying that The Republican Party has become completely irrelevant.

As not-a-Republican that makes me happy, but I’m also not-a-Democrat; what makes me happy about the Republican Party becoming irrelevant is that it focuses a microscope on the inherent untenability of the two-party political system. Thank you, Donald Trump.

Go back to my assertion that interplay between business, labor, and government runs our country. That can seem like a mess as well, but having three parties running things at least assures that things happen. Our two-party system has devolved into complete entropy; our government rarely governs at all. Any system that comes down to “me versus you and there’s no effective tiebreaker available” will always do that, eventually.

Stay on the business side of things. I’m a proponent of there always being definitive tiebreakers; businesses run by two equal partners are constantly at risk of grinding to a halt or blowing up entirely. There needs to be some way to ensure that doesn’t happen, and while it’s a simple matter in business to insert tie-breaker clauses into partnership and ownership agreements, two-party politics is a zero-sum game.

The two-party system is destroying America. And thank you, Donald Trump; your potential ascension to the most powerful position in the world will very likely lead to that system’s demise; the Republican Party’s new “support” of you is less about support than about attempting to remain relevant in any way it can. It won’t work; thank you, Donald Trump.

With any luck—and especially if he becomes President—the magic of perspective will lead Donald Trump toward adjusting his rhetoric. Let’s hope we don’t get to find out. Or if we do, let’s at least hope it creates business change in politics. Thank you, Donald Trump.