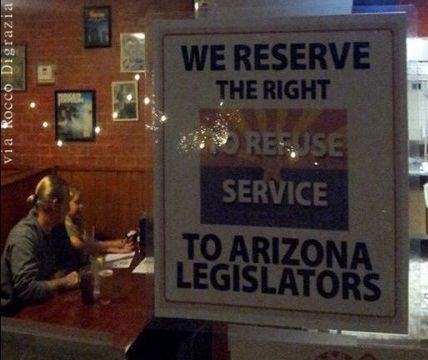 I have a new hero. His name is Rocco Digrazia, and this week he showed the Arizona State Legislature how stupid they are by banning all its members from his Rocco’s Little Chicago Pizzeria in Tucson. Talk about Influency!

I last called someone my hero when Kara Swisher blew the lid off journalistic impropriety at AOL. That was mostly business; this Influency—as most good Influency is in one way or another—is personal.

Unless you’re outside the US or have been under a rock, you can’t have missed the firestorm this week over a bill that passed both houses of the state legislature in Arizona. The law that bill represented would have allowed owners or managers of businesses in Arizona to refuse service to gay people or others with lifestyles that conflicted with the business owners’ religious beliefs. Fortunately, Arizona Governor Jan Brewer vetoed the bill—although it appears she did so not because the bill represented such a heinous position but because it became clear that Arizona’s business environment would have been damaged had she signed it into law.

I’ll play devil’s advocate long enough to acknowledge the basic idea that if something is against your religious beliefs you should have the right to refuse or avoid it. But it’s too easy to say ‘that’s against my religion’ and cite something you’ve interpreted to suit your position—and too hard to determine what represents a legitimate violation of a religious tenet—for this kind of law to be OK. And yes, I just leaned to the left politically and if you don’t like it that’s OK. Don’t contact me to do business together; doing business with people like you is against my religious beliefs.

Back to Rocco Digrazia. Mr. Digrazia, owner of Rocco’s Little Chicago Pizzeria in Tucson Arizona, put the sign you see above in the pizzeria’s window. Was he citing a religious stance not to do business with idiots? He didn’t say. But the point Rocco Digrazia’s sign makes satirically is not merely political; it’s great business. It’s real Influency.

This piece from CNN describes Rocco Digrazia’s Influency genius. He posts messages at Rocco’s Little Chicago Pizzeria every day, and the point, aside from amusing himself, is to attract attention. It isn’t all good attention, but remember that unless you really cross a line—and often even then—the only bad press is no press. Digrazia gets his press. People come into Rocco’s Little Chicago Pizzeria in droves. Rocco Digrazia is practicing the analog equivalent of search engine optimization.

I expect people engage with Mr. Gigrazia when they stop in, and that he engages them right back such that whenever they’re in or near Tucson, Little Chicago Pizzeria becomes their pizzeria. That’s Influency. I’ll bet Rocco’s authenticity is on full display, too.

One silly sign in one formerly obscure pizzeria window, and Rocco Digrazia is famous. Done right, saying what you mean can be the best Influency of all. Want to do some of that for your business? I’m right here.