I’m Louis CK. I Have a Million Dollar PayPal Account

Louis CK, as I’ve already told you, is a marketing genius. Now, just as the crazy-successful comedian is making a name for himself in media distribution and becoming more and more wealthy, Louis CK is also showing just how well he understands the Internet.

Today, Louis CK announced that his popular concert film shot last month at New York City’s Beacon Theater has grossed over a million dollars. He even proves it, by showing us a screen capture of his PayPal account: 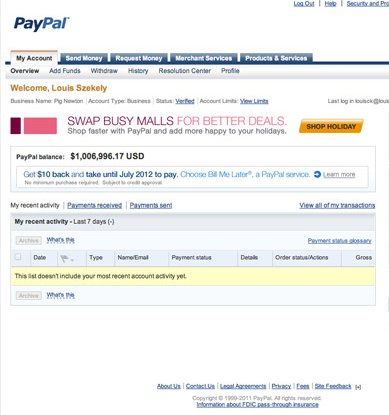 You can see this for yourself by visiting https://buy.louisck.net/news, assuming Louis keeps the image in place. You can also see it by visiting https://buy.louisck.net/statement, which WAS the address where Louis CK was keeping us updated on the success of his no-longer-so-little media distribution experiment, but now redirects to the “Louis CK News” page, which stacks up Louis’ statement from this week over his statement from last week.

One rule I constantly school our SEO Clients on (besides doing Search Engine Optimization, we teach it for those who prefer to do it themselves) is that once you create a page on your web site, you never take it down. You may not want to have it found easily, but content is magnetic; removing something you’ve written doesn’t serve you well, ever.

But maybe you want to change a page name, or in Louis CK’s case here, both change a name and have the words you write on that page become part of something else. There are techniques to get that done without sacrificing the Search juice you’ve built up.

Now, his implementation isn’t perfect; Louis CK could have done this in a way that was even more beneficial, and hey, Louis: if you’re listening, I’m here to help. But by implementing what sure looks like a simple 301 redirect, Louis held onto his content while also sending you where he wants you to be. Bravo! This is the same technique we use on the link you see in PURPLE, above. We use seo.answerguy.com to broaden our marketing effort, but when you go there you’re simply redirected to the Search Engine Optimization page here at Answer Guy Central.

I’ve said it several times since last week, but he just keeps proving it at more and more levels. Louis CK is a marketing genius. And even more, a master of business change.