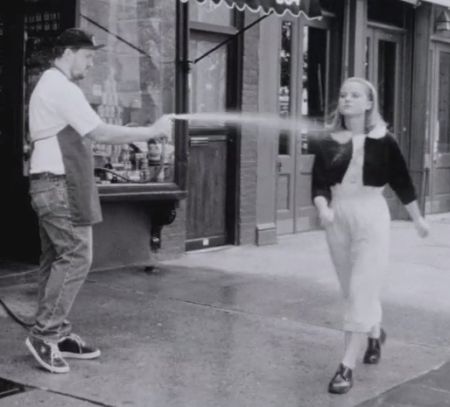 Well, hello Amy Poehler! May I spray you with my big, stiff hose?

If you buy a copy of Louis CK’s Tomorrow Night (and no, we get no commission if you do), you won’t see that question asked. Neither Amy Poehler nor Louis CK are in Tomorrow Night for very long, and the whole “spray people with a hose” scene feels at most like a sneering nod to the oddly sexual theme that runs through Louis CK’s just-released plays-like-a-film-school-project-by-the-most-demented-student-in-the-class film from 1998. And look how clever the young Louis CK thought he was, paying homage to Woody Allen!

That’s sort of a review, right? I don’t do many; I last posted an entertainment review here almost four years ago, after seeing Green Day’s American Idiot on Broadway. And even then, my real point wasn’t to play theater reviewer; I was talking about business change.

All this week I’ve been writing about the way content marketing dovetails with self-promotion, which then goes with promoting your older content to promote your newer content—and how that all meshes with optimization. I started with Apple, Business Models, and Influency Changes, moved onto the way different Intelligence Types process information, and then when Louis CK’s Tomorrow Night became available, I jumped, because Louis CK is a brilliant content marketer.

But I digress. Today, besides seeding all those internal links to our older content, let me tell you about something very specific I did in my post on Louis CK’s Tomorrow Night.

Not knowing the truth about the matter, I wrote that Tomorrow Night wasn’t really a fifteen-year-old project that Louis CK, as he’s claimed, recently found underneath his bed in film canisters. I based this guess on Steve Carell not having changed in physical appearance or presentation, and on the odd date attached to the YouTube trailer for Tomorrow Night.

I also based the claim on the knowledge that saying something controversial would attract traffic.

I was correct; one day after posting the Louis CK/Tomorrow Night/Dategate piece, it had become the seventh-most trafficked article here over a fifteen-day period. This might not sound like a big deal, but if you look at our recent traffic you’ll see that only three of the ten most popular pieces recently are themselves recent pieces; by design, we attract far more traffic over time than we do right now:

The Net Neutrality piece is two weeks old, and the article about screen resolution on Lenovo’s Yoga2Pro computer is a few days older. Everything else that is attracting traffic here recently is from months or even years ago. That includes an article discussing how rich Louis CK has become through his marketing genius.

I’ve been called out for my failure to research the dating of Tomorrow Night more thoroughly, both here at Answer Guy Central and elsewhere, and I’ve apologized for the fact that, as one reader put it, it isn’t his job to do my research.

While I’m sincere in that apology, accurate journalism isn’t what we do at Answer Guy Central. We generate traffic and build your Influency, and my goal was to do that on our own behalf while teaching you a thing or three about process and methodology. Missions accomplished; you see the traffic, and it will only grow over time.

The question is … is this wrong?

I’m not going to try to answer that question; the number of variables is huge, and I hope that even people who found my sparse research and conclusion-jumping problematic were at least a bit entertained.

And as I said, Influency-R-Us.

If you’re the kind of businessperson who’s results-oriented and can read between the lines of both what I wrote in Wednesday’s piece on Louis CK’s Tomorrow Night and what I’ve written today, then you’re also the kind of person who will be interested in this link: Contact Me By Clicking Here.