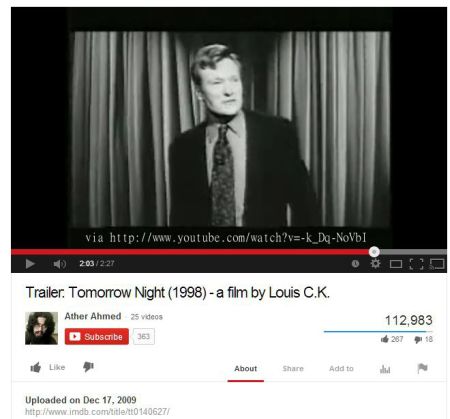 OK, so Louis CK most assuredly doesn’t need your five bucks. But if you click on Conan O’Brien above, you’ll be taken to Louis CK’s web site, where you can buy a copy of Mr. Szekely’s new film, Tomorrow Night. And let’s be clear: , . And look up at that picture of Conan again; the date on the YouTube trailer for Louis CK’s Tomorrow Night is a clue, too.

Note, January 30 2014: for accuracy, the crossed out words about Louis CK’s Tomorrow Night don’t belong here. I thank the commenter who wrote this for calling me out on the matter, and invite you to stay tuned for more …

None of which matters. Louis CK is a marketing genius, and a smart enough business person to realize that he needed to enlist the help of a serious distribution company to get Tomorrow Night out there. A bumpkin Louis CK is not; that’s a download of Tomorrow Night coming at me from Amazon Web Services:

As I pointed out when Louis CK opened the floodgates for media business change, he understands that there’s nothing to stop you, once you’ve downloaded Tomorrow Night, from seeding the latest Louis CK masterpiece to a torrent service, sharing it with the world for free. So in typical Louis CK style, that’s being covered here on the Tomorrow Night page, too:

This story, by the way, is about Influency and you way more than it is about Louis CK or Tomorrow Night.

In the posts I’ve written this week, one on business model influency and this one about different types of intelligence, I showed you how your back catalog of content can drive your ongoing Content Marketing efforts. Given Louis CK’s immense popularity and the strong likelihood that there are about a zillion people looking for Tomorrow Night today, I sure was glad to have a few Louis CK stories here to point to and the very much in-context-and-timely opportunity to capitalize on that. Maybe we can even generate enough traffic to crack the popularity list that this piece about how much money Louis CK has in his PayPal account is on as I write this. If we do, you can expect something from me like this story about Louis CK and Transparency.

And it’s about that, too; isn’t my transparency in writing about Louis CK’s Tomorrow Night obvious?

Of course it is. So: you know what to do next. Right?