Last September, Google bought the Zagat review guides from Tim and Nina Zagat. I told you than that Zagat is the best of the review guides, fixing the Internet’s fake reviews problem because of the way their data gets crunched.

I also told you that Zagat would find its way into Google quickly. I was off by a few months; while I figured that Zagat or at least part of it would become free before the end of 2011, Google has just now turned on the free version of Zagat. 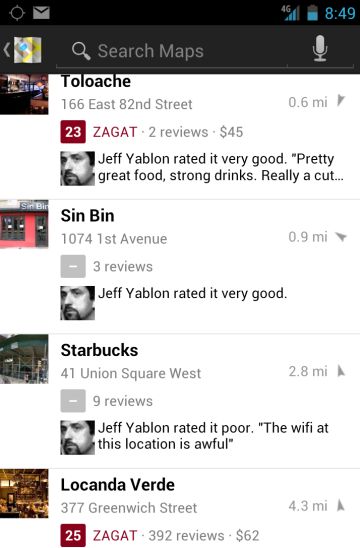 And now, Yelp has a big problem. And so does everyone else who aggregates data and posts it online to make money by monetizing traffic, because setting Zagat free is just the tip of a much larger iceberg.

Google is getting out of the Search Engine Business

Google, of course, will deny that statement, and in literal terms it might not be accurate. But the very sad, very-much-suggestive-that-Google-needs-to-be-examined-for-anti-trust-violations truth is that Google is now selling search engine inclusion in new ways that favor its partners.

It’s almost enough to make me switch to Bing.

Let’s be clear that I’m all for Google making money. I don’t much care for bait-and-switch marketing techniques, though, which is the entire explanation for me having just stopped using Google Maps to do navigation on my Galaxy Nexus SmartPhone, replacing it with Waze. Waze has some really great features, not the least of which is that it provides nearly-live, reliable traffic information. Waze is also more accurate than Google Maps in some ways; see this Waze screen shot? I took it indoors, and it’s accurate to about fifty feet. Google Maps missed this location by nearly a mile. 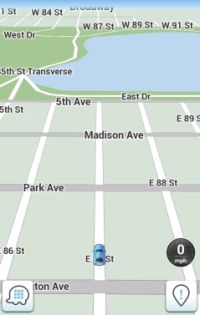 But the sole reason I abandoned Google Maps in favor of Waze is that Google Maps has stopped giving me street names in the audio part of its navigation. I’ve worked way too hard at correcting the problem and (I am The Computer Answer Guy, after all) having concluded that this is no bug, but rather than Google has intentionally removed this feature from Google Maps am left to ask myself “why?”.

I don’t have a theory tying this to a partner that will benefit, but it’s easy to guess that Google is about to start offering an enhanced version of Google Maps that includes the previously-free feature, but for a price.

And that’s where this all comes together.

Google is now into . . . well, everything. Some things are free, others are paid. But users who jump on The Good Ship Google Goodies thinking they’re getting something for free—or are just trading information as payment—should be able to rely on Google not to change those terms down the road.

No, I haven’t gone naïve. Businesses change the terms under which they do business with customers all the time, carefully building the right to do so into their customer agreements. Credit card companies raises interest rates. Banks impose fees.

But Google is playing both sides of the fence. When a bank starts charging you for an account that was previously free you have a simple recourse: go to another bank. When Google gives away a service in exchange for mass and you contributing to the Google Data Pile, then sells your data, and then wants you to pay them for access to that data, that’s not OK.

Google, having built a huge business on the backs of every retail establishment (or anyone else who sells things) in the world whereby following Google’s rules for Search Engine Optimization would result in traffic, has decided to stop sending traffic to anyone who doesn’t pay for that traffic. Don’t worry; we’re still doing SEO, and we’ve already figured out how to deal with Google’s game-changing move. But forget the implications to businesses that previously could get traffic from Google simply by being smart and practicing great Search Engine Optimization techniques; If Google is a search provider but is no longer providing search results, they’re cheating everybody. And that’s exactly what happens when Google sells all search results in whatever categories they decide can make them money.

Despite their onetime corporate creed otherwise, Google, it seems, is becoming very much an evil empire. This makes me sad. I like having one source for all my data needs, and I’m willing to pay for the fulfillment of those needs if I trust the tools and the company providing them. But it’s getting harder and harder to trust Google.

Even Google Play Music, which looks like a pretty great deal compared with say, iTunes, is problematic. Google Play Music is a serious data hog, opening up the question of whether Google gets a commission from metered-data bandwidth providers when users exceed caps or upgrade to higher data limits. And never mind that Google Play Music is missing some key features, and changes others without telling its users that they have; Google Play Music recently altered the way it reads your iTunes Music library so that if you thought you had a handle on managing Google Play Music and iTunes together, you no longer do.

Underneath it all, please keep in mind that as it adds more and more stuff in an attempt to out-social-network Facebook, Google+ is not really about social networking at all. Google+ is Social Control. And more and more, control of your wallet, too.

And also remember: if you need help making sense of how you can manage your business’ relationship with Google, I’m right here.