A Year In, What’s Happening at Google+ ? 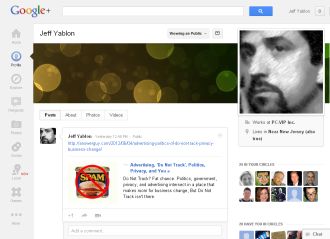 Are you using Google+ ?

Here’s a better question to ponder before we try to answer that first one: do you know what Google+ is?

The folks at Neowin don’t. Welcome to business change, Google+ style. It’s a world where the search and advertising giant throws everything it has against a wall, waits to see what sticks, gathers up what fell to the ground, and starts throwing again. And while Neowin thinks that means Google+ has “no purpose”, they’re wrong.

As former Google CEO Eric Schmidt pointed out just a couple of months after Google+ launched, Google Plus isn’t social networking, it’s social control. Schmidt’s words seemed to fall somewhere between nonsensical and Orwellian at the time, but as we approach the first birthday of Google+ and see what Google’s up to, they make sense. Google Plus is Google’s attempt to control absolutely everything you do.

You know; kind of like Facebook, which also is a non-thing but has come to be called by the complex-but-simple name “social network“.

Google+, at ninety million users, is tiny compared to Facebook’s 900 million. But the disparity in stated sizes of the two entities doesn’t come close to defining what either is or how different they are. Facebook keeps announcing growth in their user count, while Google+ stopped talking about that after just a few months.

But way more than ninety million people have become part of the Google+ ecosystem.

Just before Google announced that ninety million figure, they bought Zagat. It was obvious why; Google wanted to make restaurant reviews that they own the reviews you saw when you searched on Google. Google’s finally gotten around to integrating Zagat with Google. Or more accurately, Zagat’s been made a part of Google+.

But you don’t actually have to “go to Google+” to use Zagat; all you need is to be signed into Google while surfing the Internet, and your Google+ profile and that embedded Zagat information will be at your fingertips. And it will seem like Google’s doing you a favor, while what’s actually happening is the realization of Eric Schmidt’s proclamation on social control.

Google watches every step you take on the Internet. And while you can “opt out” of being tracked or stay signed out of your Google profile, you probably won’t because it feels as though Google is helping you out—and truth be told, they are.

And all you needed to do to get sucked in to begin with is open a Gmail account, or use Picasa Web Albums to store and share your photos online, or Google Music to stream your music collection to your SmartPhone. You never needed to actually “sign up” for Google+; you just became part of it.

So Neowin, I’m sorry, but Google+ very much has a purpose. It just isn’t one that needs to be a product or a destination.

Bringing us to Search Engine Optimization.

I’ll repeat something I said right after Google+ launched: Google+ SCARES Facebook. And whatever the numbers are, it should. Google, it seems, knows better than you do what you want to find—or even if they don’t, they’re doing a better and better job convincing us that they do.

And please stop fighting; adapt. Because while Google and Facebook Haven’t Really Merged, that stopped being the issue when Google made Google+ . . . just . . . show . . . up . . . everywhere.

And Neowin, that’s the purpose of Google+ .