The New Panda: A Cute, DANGEROUS Change in Search Marketing 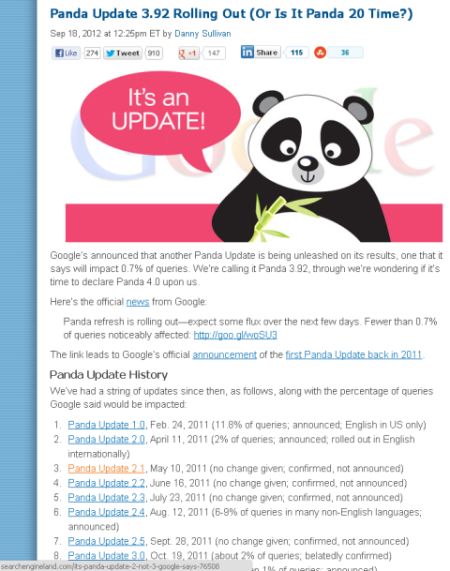 If you take a look at this piece from Search Engine Land, written earlier in the week by Danny Sullivan, one of the best known and best respected search engine optimization guys, you’ll see the entire history (to date) of “Panda”. Panda is one of Google’s initiatives to make Search better, primarily by weeding out search spam.

I’m showing you part of the list in Danny’s piece, because I want you to understand something important about Search Engine Optimization. If you take a look at the very bottom of the image I’ve included here, you’ll see the title of item #3 on Search Engine Land’s history of Panda updates. The part of that title that matters reads “it’s panda update 2 not 3 google says“.

You don’t need to care. For that matter, other than for purposes of keeping history (and thank you, Danny, for being the historian of search engine optimization!), nobody does. And although he didn’t say that, it’s Danny Sullivan’s point: we can call the various updates to Google’s Panda Search Engine spam algorithm anything we want to, so long as we understand what Panda does and what people who do SEO are doing about Panda.

And by “we” I mean “those of us who perform search engine optimization”.

As often as I’ve said that you don’t really need to hire a search engine optimization consultant because nothing we do is rocket science, the truth is that even though none of this stuff is complicated, there’s a lot of “stuff” here, and keeping track of and adjusting for it keeps becoming a more voluminous task.

I’ve mentioned Danny Sullivan here several times before: there’s this piece on search engine invisibility, the time I told you about Google being so dominant in data they had stopped caring about data, the reversal of that data dominance position that Google buying Zagat represented, and of course, this piece on how networking gets done. Danny Sullivan is one of the smartest guys in search.

But neither you, the customer, nor we, the people who do search engine optimization for you, need to care how Panda updates are numbered. What matters is results.

Want to know how we get you those results? Take a look at our search engine optimization philosophy. And then, contact me here.