The Answer Guy’s 2013 ‘Worst Person of The Year’ Award 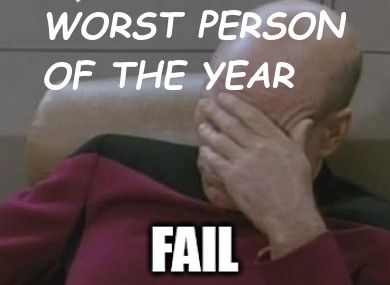 I’m not a fan of platitudes and awards. Mostly there as a matter of self-congratulation, to me many “best of” lists mean nothing—proven by how quickly they’re forgotten.

But for 2013 we’re bestowing a Worst Person of the Year award. You’ll likely forget our recipient—and I hope you do, and soon—but in the annuls of social media (anti)Influency, Justine Sacco stands as the poster child for did you really just do that??!!??!

Last week, Ms. Sacco committed an all-but-unbelievable faux pas when she tweeted Going to Africa. Hope I Don’t Get AIDS. Just Kidding. I’m White! As a result, Ms. Sacco is now the ex-head of Public Relations for media giant IAC:

I have any number of problems with the idea of political correctness, but Justine Sacco’s words were pretty awful in multiple ways. That said, I’m OK, conversationally, looking at Ms. Sacco’s misdeed as ‘one of those things’; someone forgot where she was and spoke flippantly, thinking she was being funny. And as I said in a spirited debate started by one of my younger Facebook contacts yesterday, I believe that when we do personal things they should stay personal and our employers have no right to know about them (under which circumstances Justine Sacco would have stayed employed),

However, when you say something publicly (she did) and are identifiable as an employee or other associate of someone else (she was), and that someone else is sucked into your actions (good or bad), and either benefits from or is hurt by them … then that party has a responsibility, one way or the other, to act.

Is it possible that there was another way to handle Justine Sacco? Sure. But the solution to the problem, once it became public, was simple: firing her, icky as it may seem, was the big-picture best thing IAC could do.

This is neither a free-speech nor a privacy issue; It’s a matter of IAC needing to distance itself from an employee who had done something absolutely heinous in the eyes of many, many people. And the irony is that Justine Sacco was the head of public relations for a (social, mostly) media company.

Just as I don’t much believe in awards, I also don’t believe that Justine Sacco is deserving of being called the Worst Person of 2013. But Sacco did commit the most egregious social media fail in recent memory. Let’s take a look back at some the more influence-y matters of Influency I reported to you this year.

My favorite moment of 2013 was when a salesperson at B&H Photo in New York City refused to sell me something that was unconscionably overpriced. Oh: and that B&H’s social media guy Henry Posner started following me on Twitter right afterward, because Mr. Posner understands social media and Influency. I also loved getting more comfortable with the statement Ashton Kutcher is a Social Media Genius, and finding an honest car salesman.

Equally influence-y but less positively, we found out this year that email has become just another social media stream. Unsettling as that might be, I find it even worse that marketing has become such a challenge that social media gurus are becoming unsocial. Of course, the idea that social media might be what kept you out of college or caused you to flunk is worth thinking about. Maybe, especially, for Justine Sacco.

Finally, we had a couple of issues pop up that loom huge in the way you manage Influency, but aren’t necessarily positive or negative; they’re just Internet/Marketing/Social Media Dogma, circa 2013: there’s a lot of duplicate content out there—but that’s sort of OK if you know how to manage it—and the most active person on the Internet isn’t a person, at all.

It’s a lot to keep tabs on, but that what we do here, so if you want to talk Social Media, Influency, Content Marketing, or anything else that’s on your mind as you fight to get noticed, it’s why The Answer Guy is Here.