SHOUT It: Context is Everything in Business Process 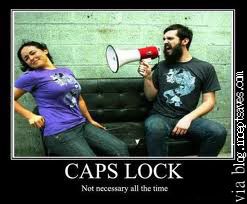 OK, so not quite everything, but it’s close. Almost everything you say and do becomes pretty close to meaningless unless the people who hear or watch you know something about whatever message you’re trying to get across. And with more and more information coming at us every minute of every day the context issue is becoming even more important; you used to have ten or fifteen seconds to get someone’s attention, and today you’re lucky to have fifteen milliseconds.

This struck me the other day, once when a news story crossed my path of consciousness and again when I threw away a piece of e-mail that I not only wanted to read, but had asked for. Those things might not sound terribly related, but they are; both are about context, and both are about our expectations for context … and how those expectations get manipulated.

First, I came across the headline this entrepreneur doesn’t think it’s fair to only test the hearing of babies born to the rich. As an American with a recollection of my kids’ hearing being tested as a matter of course, the context this story pulled up for me was “wait a second; that’s an automatic, isn’t it?” because in this part of the world, IT IS. Problem is, I was reading a headline for a story localized to India. I hope healthcare in India is improving to the point that the subject and its discussion move forward, but had I understood the context earlier I would never have clicked through to the story. And I was a bit annoyed that I’d been tricked into wasting a few seconds of my time.

The story appeared at Quartz, which as they’ll tell you on their “about” page, “is a digitally native news outlet”. This means that Quartz’ sensibility is a bit different than, say, that of The New York Times, and more like Buzzfeed; at Quartz the only real goal is to get your attention so you’ll click something. Kind of like what I just did highlighting and making a link out of the word Buzzfeed; to many people the expected context is that I’m sending you to Buzzfeed, while in fact I’m sending you to a story about Buzzfeed. And I care why? Because the longer I keep you here the better chance I have of getting your attention and maybe making you a business process management client—oh, and the more ads you see the more money we make from that revenue channel, too.

So in that case, Quartz manipulated me. And I was annoyed, but hey: at least I learned something about healthcare in India.

Upon thinking about it, though, the context of my annoyance is what came front and center. Quartz holds itself up as a journalistic outpost and some of their writing is very good, but the context of journalism having morphed into a promote-first/inform second endeavor bothers me. A lot. Go ahead; click on that journalism link; you’ll see just how much the evolution of journalism gets under my skin.

Then, that email thing happened. I receive a lot of email, including several hundred pieces of SPAM every day. I had asked for technical support on the software we use to throw pop-ups on the screen here (again … context … context … ) and the message I received in return had this message as a title:

No indicator who it was from. No context other than one that looks like so many of those junk e-mails I get each day. I threw it away, because in the fifteen milliseconds it was under my nose it was lumped in with that hour’s couple-of-dozen SPAM messages and the context I applied was counterproductive.

Context is EVERYTHING. Search Engine Optimization isn’t (exactly) obsolete. On-line dating can be weird, but it’s weird in a very different way today than it used to be. A simple question like “What Time Is The Super Bowl?” isn’t really simple at all. Even the question of the correct use of ALL CAPS needs to be answered contextually; some people equate it with SHOUTING, others use it for emphasis.

Understanding and managing business process has many facets, and applying appropriate context is one of them. The best context of all? Today’s the day to start.