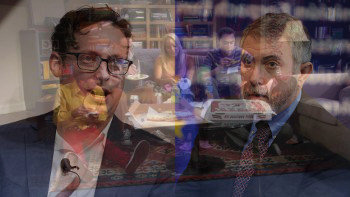 We cover a lot of ground at Answer Guy Central. This morning, the folks at ReadWrite reminded me just how much ground when they published a story about two scientists-turned-journalists who are in the middle of a Twitter slap fight and it occurred to me that:

And business changes, we’re all in the marketing business, and if you don’t adapt, you die

Plenty for a Friday, huh?

Paul Krugman is a brilliant economist, whatever you think about his positions and politics. Nate Silver knows his statistics so well that when Nate Silver speaks, maps redraw themselves. And while neither of those statements qualify either Mr. Krugman or Mr. Silver to be journalists we live in an age where everyone is a journalist. Or put another way, Everyone is a Handyman. So Nate Silver and Paul Krugman are journalists, and journalism is changing.

As I said, we cover a lot of ground here. And that was plenty and I’d like to let it all just roll around in your head to see what comes out, but let’s examine this a bit.

In that ReadWrite article about Nate Silver and Paul Krugman’s run at creating their own Big Bang Theory, one very smart thing came up: Nate Silver’s start as an editor-in-chief is looking like something of a rude awakening. And as smart as Nate Silver is, that’s to be expected, because when you change direction you go into places you aren’t nearly as good at as you were at whatever you were doing before. So Nate Silver is turning out to be more of a scientist than a journalist because despite the fact that even if he didn’t know it his job description has changed.

Helping people through the pain of changing their job descriptions is what we do here. Have you seen Video Network One?

It’s that kind of business change that we’re all dealing with, so Mr. Silver can be forgiven for his petulant behavior. Mr. Krugman’s been at this journalism thing a lot longer; I’d hope he can get his silliness in line a bit better. But regardless, the merger of journalism and marketing is real, and your job is to figure out where on the business change continuum you sit.

And then grab a chair.