The Difference Between People and Computers 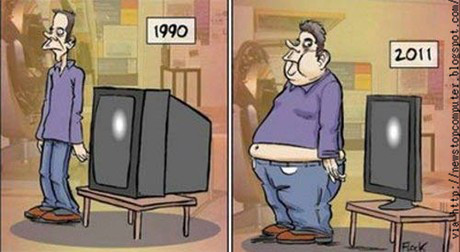 As computers get smarter, do people get  dumber?

Anyone who’s considered what happens when computers achieve singularity—the moment when real artificial intelligence happens—has included that question in their thoughts. Today, two things happened that made me consider the artificial intelligence question anew. I came across a study debunking Malcolm Gladwell‘s most famous theory, and I beat a computer at Social Media.

I’m proud—to a point—about that “beat a computer at the social media game” thing, and if you play I hope you’ll share your results here. And the Malcolm Gladwell reference is not exactly a surprise; while I find Gladwell’s stuff fun as light reading and I’ve enjoyed his persona when I’ve seen Mr. Gladwell speak, his theories have always seemed a bit too pop-psychology to stand up to real science.

Which, on both counts, is the point: there are different kinds of intelligence, and some apply better in certain places while others work better elsewhere. Computers get “smarter” than humans can be once all decision points are defined, and people are better when there are undefinable variables.

I italicized “all” for a reason: in most of the places where computer scientists are attempting to create artificial intelligence, there’s simply no point at which all variables can truly been accounted for. IBM’s Watson is amazing. Apple’s Siri is not.

Thus, my ability to beat not only a computer and most so-called social media experts at The Social Media Game: 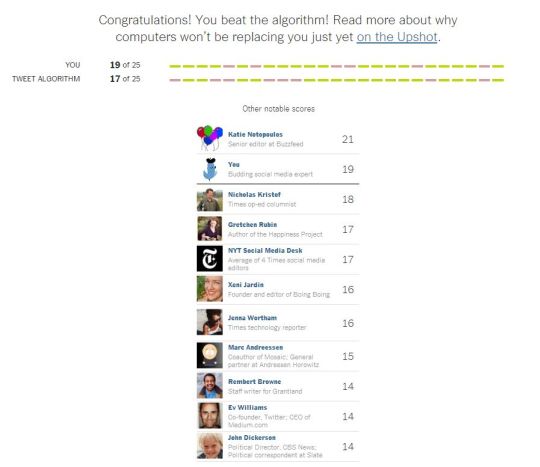 Yes, that’s self-promotional. And that’s OK. But in beating not just the computer but everyone except one Buzzfeed editor, what have I proven? That social media is a complicated beast. Am I surprised that Ev Williams, who invented Twitter isn’t “as good at social media” as I am? Only a little. Am I surprised that Nicholas Kristoff, a highly-regarded social commentator at The New York Times, was almost as good as I was? Also, only a little; there are a chunk of variables that go into understanding a chunk of variables and Nicholas Kristoff is a guy with serious EQ. Ev Williams, a very smart computer, is nevertheless very likely a little too much of one to actually be good at social media.

The debunking of Malcolm Gladwell represents a similar issue. As smart as he is—and I say Malcolm Gladwell is very smart—his theory about practice making perfect is itself a bit too perfect for blanket validity. Yes, there are places where a lot of practice will make you a lot of better. But there are places where it simply will not because, again, when there are variables often the vagaries of those variables are more important than any formula.

In other words, Everything Matters.

Want to talk about the things that make up your Everything? I’m right here.