If Uber Does Not Care, Should You? 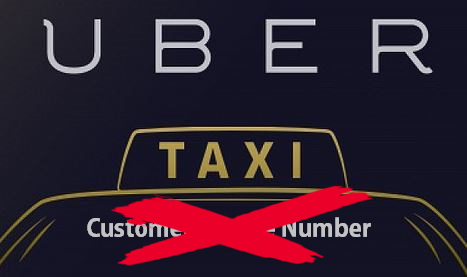 If you’ve ever tried to get customer service from Uber, the following six words probably won’t surprise you: Uber Does Not Care About You.

OK, eliminate the last two. It’s really Uber does not care; the part about you is incidental.

This would be a problem for most businesses, but Uber is so far ahead of every company in their space that “Uber does not care” is something they can afford for now. But Uber’s just lost me, and if my math is correct will lose a few hundred more users after this piece gets around. Again, they’re huge, so at the moment that doesn’t matter.

Unless you live someplace where people just don’t travel, you know Uber. Backed over the last few years with about a bazillion dollars from folks like Ashton Kutcher, Uber is far and away the largest ride-hailing service in the world, and keeps expanding both in size and in scope. When I started spending time there earlier this year I was very happy to find Uber had just started operating in Birmingham Alabama; so were the folks who live in The Magic City.

But I live and spend the bulk of my time in New York City, where we’ve had Uber for years—and where Uber has a lot of competition. Different World.

But not to Uber. Uber does not care, to the point that “you’re just a transaction” has never been more true.

Uber Does Not Care

Last Saturday evening, I was on the way out to dinner and hailed an Uber. But as I was requesting a car something glitched, and my request got stuck at “requesting …”. REALLY stuck. Removed-the-Uber-app-from-my-phone-cleared-all-caches-rebooted-and-reinstalled-the-app stuck.

And as soon as I put my account details back into Uber, “Requesting” happened again. Harking back to my days as The Computer Answer Guy I can tell you that the only conclusion to be drawn was that my request for an Uber was stuck in their system; the problem was not in the Uber App, nor on my phone.

I later proved this by going through those steps and inputting my fiancée’s Uber account. Everything was fine. I redid things yet again. As soon as I put my account back in, I was back to “requesting …”.

Over the course of the next two days I went back-and-forth with “Uber Help”about a dozen times responding in-line to customer service contacts. Every note was from a different person, kept demanding that I start over by doing everything I’d already done, and requesting the screenshot you see here, four times. It got to the point that I said “hey, could you read backward before you respond, because we’ve already covered that territory?”

I even explained that I was clearly stuck in the Uber system and asked that my account get cleared. This was rejected as not possible

Last night, 94 hours after my request, everything ran through, and an Uber driver pulled up. And I wasn’t there. And I was charged a no-show fee, and I expect I’ll see my Uber rating drop as soon as the driver reviews me and it runs through the Uber system.

The Result of Uber Not Caring

Not being there when the car appeared didn’t mean I didn’t see all of this happening in real time; that’s what’s great about Uber. But it’s also what’s great about their competitors, and here in NYC getting a car from Lyft, or from Gett is almost as easy as from Uber. In fact, you can even hail a NYC taxi from your phone. But because I’m used to Uber I would have stayed with them … until I wrote to them to get my cancellation fee put back in my bank account. What ended Uber for me? Their response was to issue me a credit I could use on a future Uber trip, and I’d been clear that wasn’t OK.

Here’s the  sad part: here at Answer Guy Central, where customer service is a touchstone both for us and our clients, we maintain The Answer Guy’s Customer Service Wall of Shame. And the “Uber Does Not Care” thing illustrates not so much that Uber’s customer service is bad, but that they simply don’t have any. Because that’s true we aren’t even bothering to put Uber on the Wall of Shame.

Bringing us back to you. Whether it occurs to you or not, you’re in the customer service business. Forget that, and you chase customers away.

If your business is big enough you might not care. But unless you are large enough for “Uber does not care” to apply then if you have competition of any sort and don’t invest in customer service, you’re making a crucial mistake.

I’d apologize for writing 700 words to get to a 16-word punchline, but there’s a part of me that hopes Uber does not care turns out wrong and this story helps them.

Want to talk about how you can make your customer service processes better?