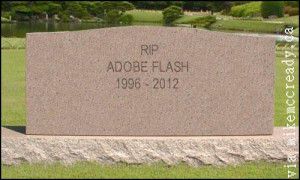 Business process often begets business change. Business change scares people. What if something I try to change is hard? Waaaaaah! This week, Google killed Adobe Flash. Google didn’t say that’s what they were doing, and since Flash is one of the few things that Google doesn’t own they didn’t actually have the power to make Flash go away, but Google’s actions ensure Flash’s imminent demise.

Google had multiple incentives for killing Flash off. One that’s less obvious and more about business process is that Flash’s continued existence in any form whatsoever dampens Google’s ability to push us all toward HTML5, which enables Google’s .WEBM video standard. More significant, though, is that Flash has become a genuine encumbrance to meaningful search; Apple/iOS devices have never played nice with Flash and Google killed off support for Flash in Android a couple of years back, so with more and more searches occurring on mobile devices having results that point at pages with Flash on them creates frustration and makes Google look bad when users follow Google links to those pages. C’mon admit it; you like when your toys work right … right? Nobody likes when things that are simple become difficult!

The death of Flash would be almost a non-story if it wasn’t for the impact the change will have on your business as you build content marketing plans. In putting together the piece you’re reading right now I was digging through our archives and came across this piece from 2010 about The Onion Spoofing Apple’s Genius Bar. The video that The Onion had originally created was made with Flash, and I needed to do a bit of hunting around to find the newer version of the Friend Bar video and then update the post from four years ago because The Onion had killed the old version.

And that’s the easy part of this business process change.

I’ve just searched Answer Guy Central for other uses of Flash, and the good news is that there are only seven more. The bad news? While I can alter the two that live here and date to around five years ago, there are others that live elsewhere and that I can’t fix until the other web sites change their old Flash videos to a newer standard! And our search engine optimization has already taken a small hit; follow the search I told you about in this story from just two weeks ago and you’ll see that the image I referred to is … gone.

Kind of justifies our policy on copying images, you know?

Keeping an eye on changing trends and obsolete technologies is an important part of business change and business process; things that are starting to look obsolete need to be managed. And while I’m grateful that it’s a pretty small task to handle I don’t like that in opting for standardization of a new sort Google’s created a hard choice for me—and for you, although we’ll be glad to manage this process change for you.

But change it they have. And that’s why managing your business processes matters.