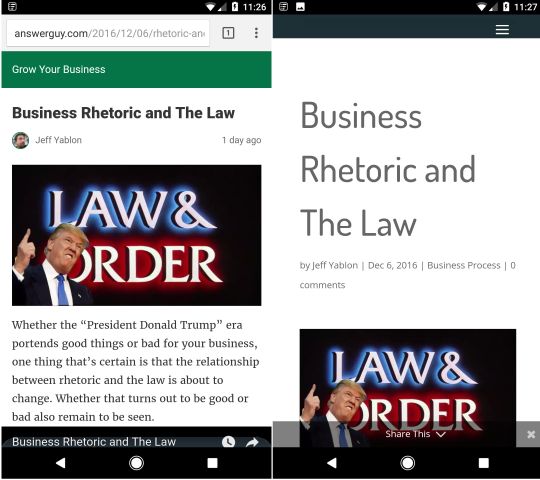 Houston, we have a Donald Trump problem. Now, thanks to the mess that was the US Presidential Election of 2016 there’s a content marketing problem, too.

Call it The Google AMP Identity Problem. It’s not a small thing.

The picture at the top of this article is a combination of how a piece I wrote earlier this week looks on mobile devices. If you click on it you’ll see that page, formatted for the device you’re using.That means you’ll see the right half of the image if you’re on your phone, and a more robust version of the same thing if you’re reading this on a computer.

But the version you see on the left is how you’ll see the same page if you search for something on a mobile device and this page is in your results. At least, that’s true as long as we keep using Google’s Accelerated Mobile Pages technology. Give it a try by using this link and selecting the first result (if you’re using a computer to read this you can click here to see it).

The part about “as long as we keep using Google’s Accelerated Mobile Pages technology” is key. We just flipped on AMP a couple of weeks ago and were already thinking about turning it off. And then yesterday stories illustrating a problem with AMP that we hadn’t even considered started popping up.And

Google AMP starts out as a great idea; Google wants the Internet to run smoothly, especially on mobile devices. Lean pages help with this. Pages that don’t include odd elements do, as well. And because you want both your customers and Google happy, fast, well-behaving web pages are good for you, too.

Even before the Donald Trump/fake news issue popped up, though, a problem we’d noticed with AMP was becoming bothersome. Leaving parts out of your web pages … leaves parts out of your web pages. That’s a decision you might be OK with if you’re just trading off advertising revenue for speed and good relations with Google. But what about when pieces of your content get deleted? 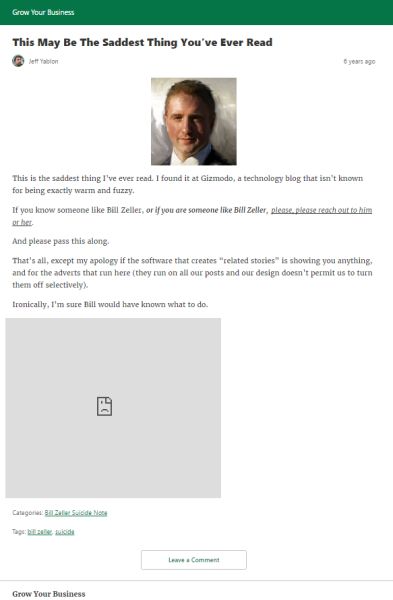 Recently I penned this piece, Context Doesn’t Matter. Problem is, context does matter, and applying AMP to the story I was writing about proves it. Here it is without AMP, and here it is with AMP applied. See that blank space where the letter shows up in a non-AMP page? Take it away and there’s no story.

As the Internet evolves, making changes to the way six-year-old content displays will be a reality of life. Annoying or not, our overlords at Google control our lives that way. But to what end? Truth is, there are so many elements in what makes Google happy that even Google doesn’t understand them all. So you might not care. You might just deal with it.

But get past the content marketing issues that the Google AMP Identity Problem creates and you’re left with the new reality. Homogenize the way content gets displayed far enough and you can’t tell the real thing from the fake. At that point, fakes news might as well be real news.

And I thought Native Advertisements were a big problem. Just one more reason it’s really hard to like Donald Trump.